Intel, Brookfield to Jointly Invest $30B for Expansion of Semiconductor Manufacturing Plants in Chandler, Arizona 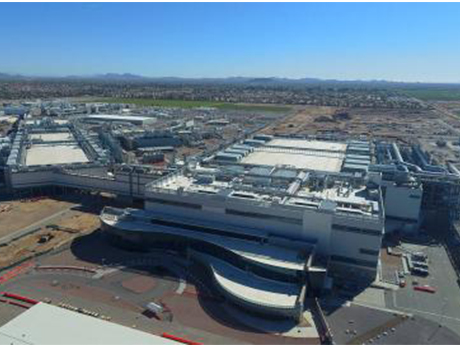 Dubbed the 'Semiconductor Co-Investment Program,' the partnership between Intel and Brookfield will create two new production facilities on the 700-acre Ocotillo campus in Chandler, Ariz., that Intel established in 1980. (Photo courtesy of Intel Corp.)

Under terms of the agreement, the companies will jointly invest up to $30 billion in the buildout, with Intel providing 51 percent and Brookfield Infrastructure Partners providing 49 percent of the total project costs. Dubbed the “Semiconductor Co-Investment Program,” the partnership will create two new production facilities on the 700-acre campus, which Intel established in 1980.

Semiconductors, or chips, are an essential element of most all electronic and computing devices, including electric vehicles, phones, tablets, TVs, home appliances, solar panels and gaming consoles.

“Semiconductor manufacturing is among the most capital-intensive industries in the world,” says David Zinsner, Intel’s chief financial officer. “Our agreement with Brookfield is a first for our industry, and we expect it will allow us to increase flexibility while maintaining capacity on our balance sheet to create a more distributed and resilient supply chain.”

In addition to the influx of private capital via its Brookfield partnership, Intel has been working with the federal government to advance incentives. President Joe Biden recently signed the CHIPS and Science Act of 2022 into law, which includes funding for $52 billion in incentives for the U.S. semiconductor industry. There are similar government incentives in European countries that Intel is monitoring.

Additionally, the U.S. Congress is currently considering the FABS (Facilitating American-Built Semiconductors) Act, which would establish a semiconductor investment tax credit in the United States.

Intel says the co-investment partnership with Brookfield could represent a blueprint for partnerships with other capital partners for future buildouts globally. The firm says the combination of private capital and government incentives is necessary for the advancement of semiconductors.

Brookfield is traded on both the New York Stock Exchange and Toronto Stock Exchange. The firm’s NYSE stock price closed at $51.02 per share on Monday, down 9.8 percent from $56 a year ago.