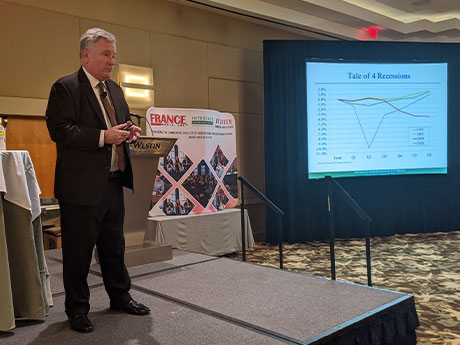 ATLANTA — After a quarter characterized by rising costs of living and mounting inflation, “recession” is the word on everybody’s lips. But Roger Tutterow, professor of economics at Kennesaw State University in Georgia, states that “it is not a foregone conclusion that we’re in a recession today or that we’ll get there in the next several months.”

Tutterow noted that looking at these four components of economic activity and comparing them to today indicates a softening economy and an elevated risk of recession, but he does not believe that the economy is necessarily contracting. He puts the risk of a recession in the next 12 months as roughly one chance in three.

Tutterow’s assessment of the current state of the economy and his near-term outlook came during a keynote address Tutterow delivered at the ninth annual InterFace Seniors Housing Southeast, a networking and information conference hosted by France Media’s InterFace Conference Group and Seniors Housing Business. The event was held Wednesday, Aug. 17 at the Westin Buckhead hotel in Atlanta and drew 324 attendees.

While GDP contracted at an annual rate of 1.6 percent in the first quarter of this year, Tutterow points out that the trade sector alone contracted by 3.3 percent, skewing the numbers. The trade sector encompasses domestic, imported and exported trade of wholesale and retail commodities. “Take out trade and the economy actually grew in the first quarter,” Tutterow explained. “Consumption was up, investment was up.”

GDP fell a further 0.9 percent in the second quarter, “but we must remember that GDP measures not what we sell, but what we produce. And sometimes there’s a difference in those two,” he said. He attributes this drop in GDP to supply-side constraints, stating that business inventories fell enough to clip 2 percent off GDP growth last quarter.

Tutterow also spoke on the Great Resignation of workers quitting during the past two years. In July 2022, the U.S. Bureau of Labor Statistics reported that the rate of Americans quitting their jobs had reached highs not seen since December 2000, but Tutterow remarks that a significant aspect of this is the aging of the baby boomer generation, and thus senior workers opting toward retiring — and possibly moving into seniors housing.

“More seniors are going to be working in jobs that they can do remotely or hybrid, in which case the kinds of factors that determine where they want to relocate are quality of life, access to medical care, and so on — all things that will support the seniors housing industry,” he explained.

What causes Tutterow the most concern is the American household sentiment toward the economy. The University of Michigan’s consumer sentiment index sank to a reading of 50 in June, marking the lowest level on record since 1952. The sentiment index rebounded to 51.5 in July and 58.2 in August, but those readings are still at the lower end of the scale.

Tutterow attributes this low consumer sentiment to high energy costs throughout the second quarter. “We’ve watched this data for 40 years. Every time the price of oil goes up and the price of gasoline at the pump rises, you see consumer confidence come back down.”