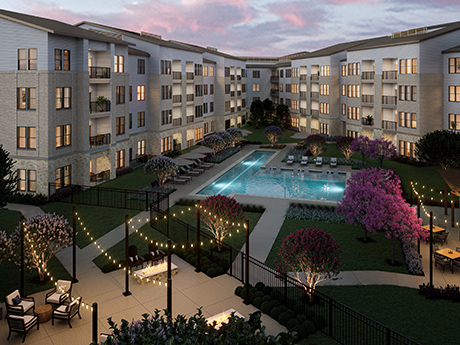 Greystar began leasing Album Mansfield, an active adult community in Fort Worth, last December. The fact that the community only has 190 units could facilitate and expedite the lease-up process, which some owner-operators say is the hardest part of developing these properties.

DALLAS — Completing the lease-up and stabilization of new communities in a timely and cost-efficient manner is the most difficult aspect of developing active adult properties in the current environment.

Such is the assertion of developers that are immersing themselves more deeply in this fast-growing sector of commercial real estate, which lies somewhere in between traditional multifamily and independent living on the spectrum of residential uses and services provided.

The challenges of fast and effective lease-up programs are attributable to several factors that are unique to the emerging asset class, which also tussles with obstacles like rising construction and operating costs that are impacting all product types in all major markets.

A panel of industry professionals with experience in developing and operating both traditional multifamily and seniors housing properties spoke to these challenges during the second-annual InterFace Active Adult conference on June 2. Held at the Dallas Downtown Marriott Hotel, the event also featured insight and analysis from lenders, investors and architects that are active in the space, as well as active adult renters themselves.

Ryan Maconachy, vice president at Newmark, moderated the development panel, which kicked off the main day of the conference with a discussion of what the term “active adult” actually means. The ways in which various owners and operators conceive of the term is central to how the physical product is marketed, which is in turn instrumental to how efficiently a property leases up. But as the panel concurred, with an asset class that’s still very much in its infancy, there are multiple avenues for achieving that goal.

“This is a disruptive asset class that was born as a result of the void between traditional multifamily and independent living,” said panelist Scott Stewart, founder and managing partner of Capitol Seniors Housing. “We’re all trying to climb inside the heads of consumers and give them what they want. It’s tough, but it’s interesting and fun because nobody has nailed it down yet because of the newness of the asset class.”

Lease-up is slow, but ‘sticky’

Zach Crowe, managing director of U.S. real estate at New York City-based private equity firm The Carlyle Group, was among the first panelists to broach the subject of lease-up, noting that the push to obtain initial occupancy is usually rewarded by healthy resident retention.

“The biggest piece of advice I would give newcomers to the active adult space is not to build too many units, because lease-up is definitely the hardest part of this product type,” he said. “Once these assets are full, they become very sticky. Active adult has some of the longest lengths of stays among residents of any asset class. So once you fill them up, they really hum along and are easy to maintain.”

Among the biggest challenges in successful lease-up, Crow added, is persuading first-time active adult residents that it makes sense to sell their single-family home.

“What’s tricky about lease-up is convincing people who’ve been in their homes for 30 or 40 years to downsize and make a big emotional and psychological move,” he explained. “Kids, or sometimes grandkids, need to be on board, and that process is very different from traditional multifamily, where people make those leasing decisions more quickly.”

Other panelists agreed that due to the slower nature of lease-up within the active adult space, capping the number of units below what the site can support is a sensible strategy. Richard Hutchinson, CEO of Discovery Senior Living, said that his firm usually cuts off active adult projects at about 180 units. This ensures that the company’s leasing and marketing teams can manage their tasks more effectively, simply by having a lesser amount of inventory to monetize. Hutchinson also said that his firm focuses on digital marketing techniques to generate leads and spread awareness of the community’s status as a place people want to be. “We’re very focused on driving prospects to some type of destination and planning on having 10 to 20 percent of those residents come from outside of the area,” he said.

“Our buildings are typically 150 to 160 units, although our one outlier, which had 230 units, ironically turned out to have the best lease-up,” added panelist Bob May, managing partner at California-based Avenida Partners. “We’d never do it again though, because with 230 units, that’s 300 people you’re trying to serve.”

Panelist Ben Burke, senior vice president of development at Denver-based Headwaters Group, offered a more simplistic solution to facilitating lease-up of active adult properties — charging lower rents — though he acknowledged that such a strategy has its limitations.

“From both a development and acquisitions front, lease-up is the biggest risk in the active adult business,” Burke said. “We try to de-risk that process by focusing on the parts of a market that have the highest penetration rates at lower rents.”

“We try to develop buildings that provide surface parking and that are stick-built,” he said. “We try to buy our land at the right price so we’re not building at too high of a basis, then pass those savings on to our residents in the form of lower rents. That allows our buildings to lease up more quickly. If we can deliver a building that’s 30 to 50 percent preleased, then the finish line is much closer in sight.”

Stewart of Capitol Seniors Housing reiterated the importance of easing prospective residents through the turbulent downsizing process to a successful lease-up campaign. “It’s tough to fill these buildings up, especially when you realize that nobody’s going to move into your community until they sell their home,” he said.

Fortunately for active adult owners and operators, single-family home prices are up 20 percent on a national, year-over-year basis, so it’s as good of a time as any for homeowners to consider selling.