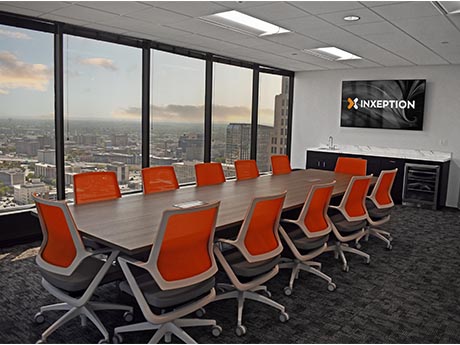 Inxeption says the new regional headquarters space at PNC Tower in Louisville will be able to accommodate up to 200 employees over the next five years.

LOUISVILLE, KY. — Inxeption, a Silicon Valley-based industrial commerce and supply chain digitization firm, has opened its new offices at PNC Tower in downtown Louisville. The firm, which supports software and several apps for the logistics industry, is occupying 18,000 square feet on the 29th floor. Inxeption says the new regional headquarters space will be able to accommodate up to 200 employees over the next five years. Kentucky Gov. Andy Beshear and Louisville Mayor Greg Fischer are scheduled to appear at a ribbon-cutting ceremony for the office.

Inxeption’s operations, sales and technology employees at PNC Tower will have immediate access to the nearby Fourth Street Live! and Louisville Slugger Field, home of the Louisville Bats Minor League Baseball team.

“In the last two years, Inxeption has integrated itself into the business community in Louisville, a crucial logistics hub,” says Josh Allen, Inxeption’s chief compliance officer and first Louisville employee. “We continue to undergo substantial growth, so we have strategically renewed our commitment to the city by relocating to a space that can scale as we expand our supply chain operations in support of more industrial businesses.”

The new offices come on the heels of Inxeption’s latest financing round at a pre-money valuation of $3 billion.