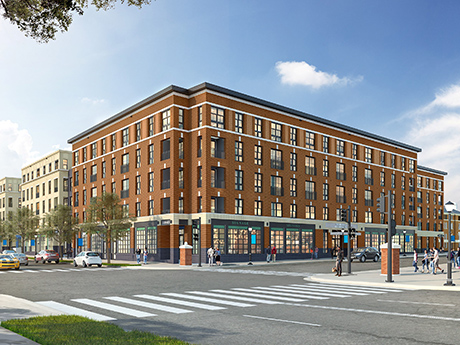 The Reynard is a component of The Parks at Walter Reed, a 66-acre redevelopment of the former Walter Reed Army Medical Center in northwest Washington, D.C.

WASHINGTON, D.C. — J.P. Morgan Chase has provided a $75.6 million construction loan to Urban Atlantic and Triden Development Group for The Reynard, a 344-unit apartment development in Washington, D.C. The property will be part of The Parks at Walter Reed, a 66-acre redevelopment of the former Walter Reed Army Medical Center in northwest D.C. The project represents the eighth ground-up project at the mixed-use campus. Urban Atlantic and Triden, in partnership with an opportunity zone investment from CrossHarbor Capital Partners, will build the apartment building on a 2.3-acre site adjacent to the Whole Foods Market-anchored Parks Marketplace. Amenities at The Reynard will include coworking space, a fitness center, resort-style pool and a maker space with podcast studios. Unit types range from studios to three -bedrooms, including 11 live-work units with storefronts along Georgia Avenue and 26 income-restricted apartments reserved for households earning 80 percent or less of the area median income. Bozzuto will manage The Reynard upon completion, which is expected to be roughly 24 months following the ground breaking.