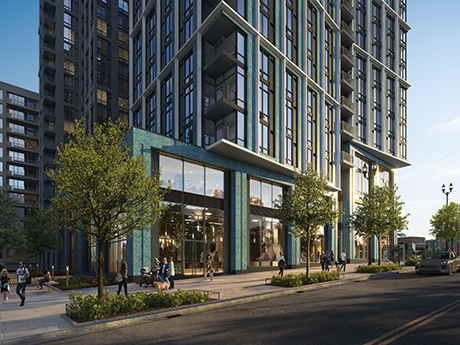 ARLINGTON, VA. — JBG Smith (NYSE: JBGS), an owner and developer of mixed-use properties in the greater Washington, D.C. market, has begun construction on a pair of multifamily towers at 2000 and 2001 South Bell Street in Arlington.

The development is expected to bring 775 apartments and nearly 27,000 square feet of retail space to National Landing, a neighborhood anchored by Amazon’s HQ2 campus and the Virginia Tech Innovation Campus, both of which JBG Smith is developing.

“The start of construction at 2000 and 2001 South Bell Street is a major milestone in National Landing’s ongoing transformation and delivers on our pledge to build new housing in lockstep with Amazon and Virginia Tech’s growth in the neighborhood,” says Bryan Moll, executive vice president of development at JBG Smith. SK+I will serve as the architect of record for both towers, which are designed to meet LEED Gold certification standards. Balfour Beatty will serve as general contractor for both buildings, the completion dates of which were not disclosed.

The two towers represent the second major ground-up multifamily development that JBG Smith has commenced at National Landing in the past 12 months. In March 2021, construction started at 1900 Crystal Drive, an 808-unit multifamily asset with more than 38,000 square feet of street-level retail space across two 300-foot towers.

The properties will be situated one block from the Crystal City Metro station, JBG Smith’s new dining and retail establishments along Crystal Drive and an upcoming pedestrian bridge that will connect downtown Arlington to Ronald Reagan Washington National Airport.

Demolition and other site prep work began at 2000 and 2001 South Bell Street in early 2021, and the project received unanimous approval from the Arlington County Board in May 2021. The approved project contains a community benefits package including numerous site and adjacent infrastructure improvements, dedicated parks and open space, funding for a new library to be located in National Landing and dedicated affordable housing.

JBG Smith has 1,583 units currently under construction and an additional 1,760 units in its near-term development pipeline in National Landing. The Bethesda, Md.-based firm is also on track to deliver the first phase of Amazon’s HQ2 in 2023 and the completion of Virginia Tech’s first permanent Innovation Campus facility in 2024.