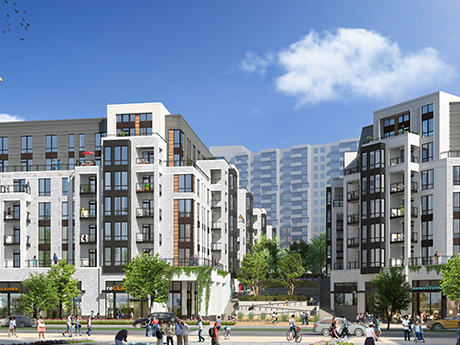 In addition to the real estate uses and public spaces as part of its project in Arlington's Riverhouse District, JBG Smith would also preserve over 200 existing trees and plant 800 new ones.

ARLINGTON, VA. — Chevy Chase, Md.-based developer JBG Smith has filed plans with the City of Arlington to develop a mixed-use project within the 36-acre Riverhouse district. The project would preserve three existing multifamily buildings while also adding three mid-rise apartment complexes with more than 1,000 units, as well as 185 seniors housing residences, 265 townhomes and 164 for-sale condos. In addition, the project would feature 30,000 square feet of retail and restaurant space and more than seven acres of public parks and green spaces that would be connected by trails and paths. Lastly, JBG Smith would invest in infrastructural improvements throughout the district and commission public art installations. The development team is engaging in the communal outreach phase of the project while it awaits the completion of the permitting and approvals process.