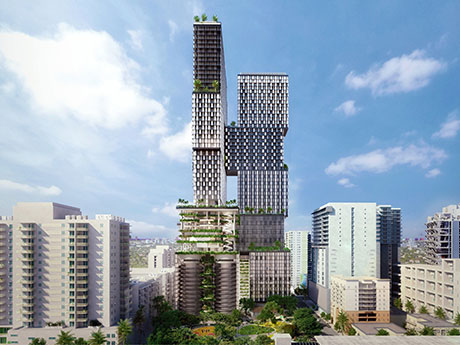 The development will include the country’s first Treehouse Hotel, along with multiple food and beverage outlets and public spaces. As part of the Brickell Rapid Transit Zone, the project will enhance access to public transportation, provide direct connection to The Underline and reinvigorate Southside Park, according to JDS. The Underline is a 10-mile linear park, urban trail and public destination being built on land below Miami’s Metrorail that is opening in phases through 2025.

Construction is wrapping up on the project’s foundation work. A timeline for completion was not provided.

SHoP Architects is the project architect, Rockwell Group is completing the hotel interior design, James Corner Field Operations is the landscaper and Krista Ninivaggi of Woods Baggot is handling the residential interiors.

The design of the tower features a series of stacked structures. Each level is designed to create both form and function for the variety of uses — residential, hotel, micro-units, office and wellness. The building will offer a health program on a membership basis.

Michael Stern, founder and CEO of JDS, says that Brickell is missing an iconic park. In his eyes, public parks like those found in New York City or Chicago help define cities. “Through our public-private partnership with the City of Miami, we will be making significant improvements that will elevate [the park] along with the adjacent Underline to the world-class status the Brickell area deserves.”

This development marks the fourth large-scale project between JDS and SHoP Architects. Founded in 2002 and headquartered in New York City and Miami, JDS focuses on acquisition, development and construction.