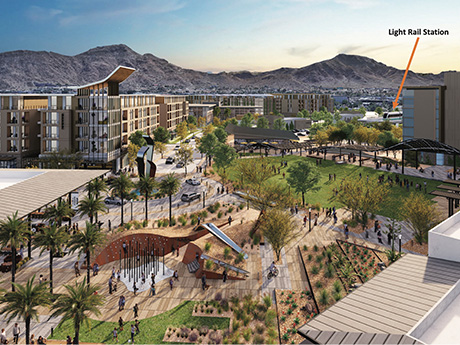 The Metrocenter mall redevelopment in Phoenix centers around a new light rail station, scheduled for completion in 2024.

The development group has formed a strategic alliance with Hines, an international real estate firm, to redevelop and repurpose the Metrocenter Mall into a walkable village that will be home to apartments, condominiums, curated boutiques, popular retail stores, restaurants, bars, a town-center park and other commercial and entertainment venues.

The property spans approximately 64.2 acres of land in a Qualified Opportunity Zone. The plans for the village include over 2,600 multifamily units, 150,000 square feet of commercial space and 4,100 surface and garage-deck parking spaces. The development team has also signed agreements with the City of Phoenix for a public-private partnership for public improvements.

The purchase includes both the Dillard’s building and U-Haul building, which formerly housed a Macy’s. Developers confirmed the planned $850 million redevelopment of the property will begin immediately.

The redeveloped Metrocenter will be designed as a transit-oriented community, encompassing the city’s new light rail station currently under construction on the site. The City of Phoenix invested approximately $150 million to build the station, which is scheduled for completion in 2024 as part of the northwest extension. The station will serve as one of the major focal points of the development and will provide direct connectivity to downtown Phoenix, Phoenix Sky Harbor International Airport and Arizona State University.

“The City of Phoenix has done a lot of work to make this possible, not the least of which is the Northwest Light Rail Extension project to serve this destination,” says Phoenix Mayor Kate Gallego. “Metrocenter has memories for so many of us in Phoenix. As we look to the future, Metrocenter now means jobs, attainable housing, and restoring community strength to northwest Phoenix.”

Additional amenities at the development will include pet-friendly parks and green space, an amphitheater, pedestrian and bicycle pathways, walkable retail promenade and immersive water features. The village will also be designed to integrate with and complement certain existing amenities and venues within the Metrocenter Mall through its partially shaded internal pathways and roads.

Existing amenities at the site that will remain following the redevelopment include a 150,000-square-foot Walmart Supercenter, a public library, Rose Mofford Park, the Castles N’ Coasters theme park and a movie theater.