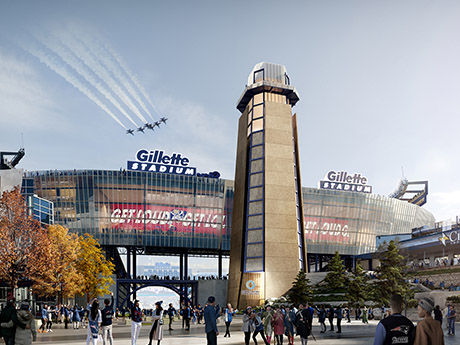 Pictured is a rendering of the redeveloped entrance plaza of Gillette Stadium in Foxborough, Massachusetts. The project is scheduled to be complete prior to the 2023 NFL season.

FOXBOROUGH, MASS. — The Kraft Group has selected Boston-based general contractor Suffolk as its construction partner for the redevelopment of Gillette Stadium, the home of the NFL’s New England Patriots and MLS’ New England Revolution. The stadium was built in 2002 and is located south of Boston in Foxborough, Mass. The redevelopment will feature a redesigned plaza leading into the stadium, including an enhanced lighthouse. In addition, the north end of the stadium will be renovated with 75,000 square feet of hospitality and event spaces that bridge the gap between the East and West Putnam Clubs, the Dell Technologies Suite Levels and the upper concourse. The development team expects to complete the project in advance of the 2023 NFL season.