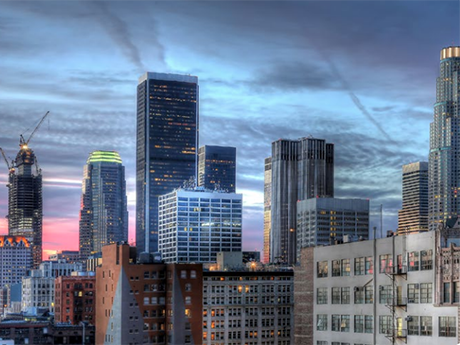 The historic core and financial district of Downtown Los Angeles contains a mix of multifamily and retail buildings.

Lee & Associates has made the full market report available here (with further breakdowns of factors like vacancy rates, market rents, inventory square footage and cap rates by city), but the overviews offered below provide sweeping looks at the overall health and obstacles for four major commercial real estate sectors.

Strong demand for industrial space throughout North America continued in the first quarter as vacancies fell to record lows and rent growth hit double digits. First quarter net absorption in the United States totaled 92.8 million square feet, which was up 25 percent year over year but down 35 percent from the 143-million-square feet average of the last three quarters of 2021.

Annualized rents rose 10.1 percent in the U.S. and the average vacancy rate fell to 4.1 percent. Part of this trend was due to a pause in new construction starts early in the pandemic. However, once developers saw orders for consumer goods begin to skyrocket shortly after lockdowns began, many made up for lost time. Currently, there are 816 million square feet of new space underway in the United States, with about 605 million square feet landing on the market in the next four quarters. That’s a sharp increase from the total 342 million square feet in completions since the second quart of 2021. Nevertheless, even as new construction has ramped up to all-time highs, the availability of quality logistics space will remain tight. More details on industrial commercial real estate can be found in the market report here.

After posting two straight quarters of modest growth and showing early signs of a recovery, the United States office market slipped into neutral in the first quarter and the national vacancy rate ticked up slightly to 12.3 percent, the highest since 2011.

Rent growth has been nil. Gains will have to wait until positive net absorption returns along with reductions of sublease space, which totals nearly 200 million square feet. Although the supply pipeline has slowed somewhat, there still is plenty of spec product under construction with 40 percent of the 142-million-square-foot pipeline listed as unleased. Among markets with the most supply underway are tech centers such as Boston, San Jose, Austin and Seattle.

With COVID-19 vaccines readily available and serious infection rates mercifully reduced, corporate America appears determined to adhere to “return to office” plans. Most return mandates were set to fully take effect in the second quarter, which is being met in some cities with indoor mask measures against BA.2, the emerging subvariant of Omicron.

One of the first reported workplace COVID-19 studies was completed recently in Houston, where 85 percent of businesses have brought employees back to their desks. Under hybrid work arrangements employees are at the office less often, 10.7 days a month compared to 17 days a month before the pandemic, according to the survey by Central Houston, Inc., an association of downtown landlords, businesses and residents. More information on office can be found in the market report here.

The North American retail market put on another strong performance in the first quarter as the sector continues the pronounced rebound that began last year. There were 23.4 million square feet of net absorption in the first quarter in the 11.8-billion-square foot U.S. market. That’s a fivefold jump from first quarter of last year and slightly more than the average of the last three quarters of 2021, which saw 73.4 million square feet of tenant growth for the year. The national average vacancy rate is 4.5 percent.

Foot traffic has returned to pre-pandemic levels. U.S. store openings outpaced closures for the first time since 2014. Since bankruptcy was sought in 2020 by more than 40 merchants, including Neiman Marcus, Lord & Taylor, JC Penney, Brooks Brothers and Ann Taylor, bankruptcies filings last year declined to a five-year low. However, with 2020’s flood of closings, landlords began repurposing large swaths of vacant space into nonretail uses such as warehousing and distribution.

Growth is being driven by increased demand for smaller spaces, which fell last year to a historic low average of 3,000 square feet. In addition, as retail follows rooftops, U.S. developers and national merchants are focused on growth markets in the West and South, turning away from many urban markets in the Midwest and Northeast that have underperformed the national average.

Malls reported 2.7 million square feet of growth in the first quarter after four straight years of contractions. While many Class A malls have recovered, suburban B and C malls are struggling to reinvent themselves after losses of anchor tenants and foot traffic. In-depth information on retail can be found in the market report here.

Following successive quarters of healthy and often unprecedented demand for apartments, tenant growth in the first quarter slowed with the onset of the Omicron variant of the coronavirus and as annual rent growth soared into the teens. Meanwhile, apartment values have skyrocketed with the national average sale price hitting $244,343 per unit in the first quarter, an 18.4 percent year-over-year increase.

First quarter net absorption totaled 54,170 units, down 39 percent year over year. In 2021 tenant growth totaled 697,963 apartments, an 83 percent jump over the previous record of 381,288 units in 2020. Average effective rents in the first quarter were $1,572, up 13.7 percent year over year and 16.4 percent since the start of lockdowns. Some Sun Belt markets, such as Tampa, Phoenix and Austin, saw annual rent hikes of more than 20 percent.

Meanwhile, multifamily developers and landlords following migration patterns of workers during the pandemic are betting heavily on apartments across the South and Southwest where warm weather and business-friendly governments have attracted workers and employers from California and the Northeast. The rent growth also boosts New York and the Bay Area into positive territory, two markets hit hardest in the pandemic. San Francisco’s average rent of $2,972, up 8.3 percent in 2021, is the nation’s highest followed by New York City’s $2,881 and San Jose’s $2,816. Lee & Associates has more multifamily information in their market report here.