LEGO Group Plans $1B Toy Factory in Metro Richmond, Its First in the U.S. 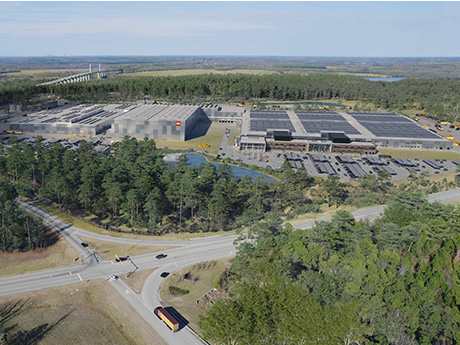 The planned LEGO factory will span 1.7 million square feet on a 340-acre site in Chesterfield, Va.

CHESTERFIELD, VA. — Danish toymaker LEGO Group has released plans for a 1.7 million-square-foot factory in Chesterfield, a southern suburb of Richmond. Over the course of 10 years, LEGO estimates it will invest $1 billion in the project and generate 1,760 jobs.

Located on 340 acres, the project also includes a solar park that will produce 100 percent of the factory’s energy needs. Construction is scheduled to begin this fall, with full production beginning in 2025.

The property will be LEGO’s seventh factory worldwide, its second in North America and its first in the United States. LEGO factories in Europe and China are also being expanded, and in December 2021, the privately held toymaker announced plans to build a factory in Vietnam to support further growth in Asia.

The industrial expansion is part of the company’s goal to shorten supply chains and reduce its carbon footprint. The project is also designed to meet LEED Gold standards.

“More and more families are falling in love with LEGO building, and we are looking forward to making LEGO bricks in the United States, one of our largest markets,” says Niels Christiansen, CEO of LEGO Group. “The location in Virginia allows us to build a solar park, which supports our sustainability ambitions and provides easy links to country-wide transportation networks.”

“Our factories are located close to our biggest markets, which shortens the distance our products have to travel,” adds Carsten Rasmussen, chief operations officer of LEGO. “This allows us to rapidly respond to changing consumer demand and helps manage our carbon footprint. Our new factory in the United States and expanded capacity at our existing site in Mexico means we will be able to best support long-term growth in the Americas.”

The LEGO Group currently employs approximately 2,600 people in the United States, where it has been operating since the 1960s. Its U.S. head office is in Enfield, Conn., and operates 100 LEGO-branded stores across the country. The LEGO Group was founded in Billund, Denmark in 1932 by Ole Kirk Kristiansen. Its name derived from the two Danish words Leg Godt, which mean “play well.”