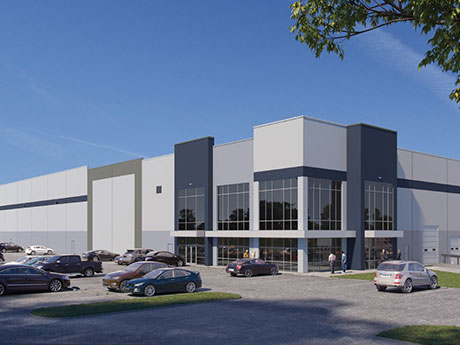 Stonemont Financial Group is building this 450,000-square-foot speculative industrial development in Westfield Center near Cleveland. Completion is slated for the first quarter of 2023.

The Cleveland industrial market enjoyed a strong first half of 2022, characterized by record-low vacancy rates, brisk new construction and increased rental rates and sales prices. Although the market has made several headlines over the first six months, many of these trends began several years ago and the pandemic only accelerated the activity level amongst several key sectors.

Market wide, the average vacancy rate was just over 4 percent at the mid-year mark, which is a slight decrease from the 4.5 percent rate at the end of last year. By most accounts, this is a record-low level and represents a decrease of two full percentage points over the last five years.

The most popular submarket, the Southeast, which encompasses favored industrial locations such as Solon, Twinsburg, Streetsboro and Aurora, finished the first half with a slightly higher rate of 4.4 percent. However, this market has also seen significant new construction, including a predominance of speculative projects.

The submarket with the lowest vacancy rate is the Southwest, which stretches from Middleburg Heights through Medina, checking in at 3.7 percent. At the other end was the downtown submarket. Characterized by a significant amount of older properties, this submarket has a still-respectable 5 percent vacancy rate.

Leasing velocity has been strong, with over 2.5 million square feet of net absorption over the first half of the year. Much of the leasing activity has been concentrated on newly constructed buildings, as opportunities in second generation properties have been limited.

In most of the submarkets, demand is outpacing supply, which continues to be constrained by the spiraling costs associated with new construction. Despite the high cost, there is currently almost 3 million square feet of new industrial development underway. This follows the 5 million square feet delivered in 2021.

Geis Cos., a local design-build firm, partnered with Stonemont Financial Group to begin work on the region’s latest industrial park, Turnpike Commerce Center. Located one exit east of the popular Streetsboro turnpike interchange, this park will kick off with a 1 million-square-foot warehouse and ultimately encompass several million square feet on 470 acres.

In recent years, Amazon had been a leading prospect to lease up any new construction. In addition to building and owning three substantial fulfillment centers in this region, the online retailing giant has completed over a dozen leases in third-party properties since 2018.

The brisk pace of leasing activity coupled with strong demand outstripping limited supply has resulted in a dramatic jump of both rental rates and sales prices.

The average asking rental rate across the Cleveland region among all properties edged over $5 per square foot net as of the end of the second quarter, marking the first time that average rents have exceeded this threshold. On the leading edge of this is the average asking rate for new construction, which is quickly approaching $7 per square foot net.

Sales prices have also seen significant upward pressure, particularly amongst investment sales. A terrific example of this is a 198,000-square-foot property located at 22209 Rockside Road, which started life as a Walmart Supercenter in 2008. After being shuttered seven years later, it was acquired in 2017 for $2.3 million by Cleveland-based Industrial Commercial Properties and fully leased to JB Hudco at the end of last year. The property was subsequently sold to Plymouth Industrial REIT in July for $16.5 million or $83 per square foot.

Also transferring in the first half was a 92-acre, 20-building complex owned and operated by GE Lighting known as Nela Park. The buyer, Phoenix Investors, paid $5 million and said that GE Lighting will continue to remain a tenant. At its heyday in the 1970s, the complex employed 2,800 people but the number has dwindled to approximately 250.