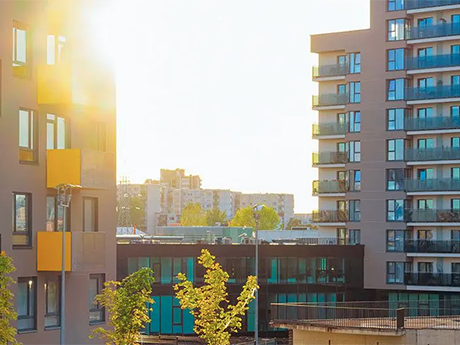 Constructing affordable housing in low-poverty, high-opportunity census tracts can be challenging. However, developers, lenders and credit allocating agencies may be able to use tax credits to create more housing in these areas.

The Section 42 Low-Income Housing Credit program has been America’s primary tool in the effort to construct affordable homes for low- and moderate- income households and ease renter cost burdens since 1986. This public-private partnership has created or preserved more than 3.1 million rental units, accounting for over 30 percent of the nation’s affordable housing stock.

Congress is considering legislation that would materially expand and strengthen the tax credit program. In addition to several technical changes to tax credit accounting and rules governing the use of private-activity bond financing, the legislation would authorize increases in credit allocation in 2021 and 2022. The impact of these changes would be substantial, catalyzing construction of more than 100,000 additional units per year over a 10-year period, perhaps trimming the number of rent burdened low-income households by half.

LIHTC development in middle- and upper-income and racially diverse census tracts has taken place for decades. In 2004, for example, 42 percent of new construction and new construction/substantial rehab family units placed in service were sited in middle-income (MI) (80 to 120 percent of median household income) and upper-income (UI) (>120 percent of median household income) tracts, and 39 percent were constructed in diverse tracts in which minority residents made up less than 50 percent of the population.[i]

Although the portion of family units sited in ethnically diverse tracts increased materially in recent years — reaching 55 percent in 2019 — the percentage located in middle- and upper-income tracts remained largely as it was before the findings of the MTO project were published. In 2019, the portion of new family units developed in tracts where median household incomes exceed 80 percent of area median income (AMI) increased only 3 percent from the 2004 level to 45 percent.

While the reasons for state disparities are legion, each state’s allocation priorities play a significant role. Two large population states — Georgia (57 percent) and Texas (72 percent) — have achieved distinctly greater LPHOA concentration than their peers in recent years. Each introduced into their Qualified Allocation Plan (QAP) scoring important tie-breaker and basis-boost eligibility provisions that encourage LPHOA development, and recent allocations suggest that they have been, in part, successful. Their disparate approaches for strengthening state allocation policies may serve as templates for others seeking to maximize the impact of housing credits on eligible households.

Texas QAP provisions that encourage LPHOA development are founded on selection criteria that promote geographic dispersion and a highly competitive selection process. Credits are allocated to 13 geographic regions in the state according to a formula and further subdivided between urban and rural areas. These provisions discourage concentration in regions where land and construction costs are low relative to AMI and encourage construction in more difficult-to-build tracts, while maintaining competitive credit demand overall in this fast-growing state.

Dispersion within regions is forwarded by proximity limitations that render ineligible those applications for properties located within one or two miles of projects determined to better serve mission critical needs or in tracts with pre-existing tax credit inventories exceeding a threshold amount (20 percent) of total households. By the same token, when a proposed development lies in a Qualified Census Tract (QCT) where LIHTC penetration exceeds this threshold, it is deemed ineligible for the 30 percent basis boost that otherwise would be available. Therefore, developers are given incentives to focus on opportunities in tracts where the relationship between construction costs and AMI are less favorable.

Conversely, proposals that forward LPHOA goals in Texas are awarded competitive advantages. For example, a project sited in a difficult-to-develop area (DDA) where construction, land and utility costs are high relative to AMI is eligible for a 30 percent basis boost, on par with a proposal located in a QCT. Similarly, proposals located in tracts with poverty rates below 20 percent, with median income within the area’s third quartile, and contiguous to a tract in the first- or second-income quartiles, may be awarded additional qualifying “opportunity index” points for scoring purposes. Likewise, proposals located in tracts with low crime rates and that promote healthy lifestyles (proximity to parks, playgrounds, trails and full-service grocery stores) and offer ready access to public transportation, jobs and learning (better-rated schools, libraries, individuals with college degrees) are eligible for opportunity points. Properties sited in low poverty/high income tracts and tracts with severe rent burdens are eligible for tie-breaker points, a critical advantage in a competitive application environment in which many proposals satisfy primary scoring criteria.

Texas and Georgia took opposite tacks to the same destination, one highly specific, the other broadly defined. Each course successfully elevated 2019-unit concentration in MI and UI tracts above the respective states’ Section 42 tax credit program-to-date averages: from 37 to 57 percent in Georgia, and from 35 to 72 percent in Texas. Although these approaches may be more successful in states with rapid population growth and highly competitive credit allocation processes, slower growth states that adopt similar approaches — especially when deployed in conjunction with policies favoring QCT proposals that complement well-founded comprehensive community revitalization plans — also will achieve better outcomes.

This is not to say that all LIHTC properties should be constructed in low-poverty, high-opportunity neighborhoods. Some policymakers and social scientists maintain that low-income households are helped more by improving existing neighborhoods than by relocation to more resource-rich communities. State housing finance authorities should seek to maximize the social welfare benefits of scarce credit resources by prioritizing projects that either further an organized community revival plan or advance a wider strategy to reduce concentrated poverty.

Providing incentives to developers to build in high-opportunity communities is a necessary but insufficient catalyst to bring these investments to fruition. Sponsors also must be able to justify the costs of construction and operations in higher cost areas. The price of land, site improvements, utilities arrangements and personnel are often higher in opportunity-rich areas. Permitting and design requirements can be more challenging and local opposition can often make approvals more difficult, thus LPHOA developers must be creative to optimize deal economics as basis boosts alone may fall short.

Tools are at hand to help square this circle. These include income averaging to achieve IRS compliance, employment of Housing Choice Vouchers (HCVs) to raise property rent revenues and inclusion of market-rate tenants in the unit mix.

Income averaging involves adjustment to the unit-income mix to allow tenants earning above 60 percent of AMI to occupy select units. Before income averaging became law in 2018, all tax credit financed units in a property were required to be affordable for households earning 60 percent or less of AMI. Income averaging permits some units to be leased to households earning up to 80 percent AMI, with rents adjusted upward accordingly, so long as the average income of all LIHTC tenants is less than 60 percent. Averaging allows rents paid by higher-income tenants to subsidize lower-income units and support operations and debt service coverage.

To date, income averaging has not proven to be a significant benefit to LIHTC sponsors because of the manner in which the IRS has chosen to apply it. Owners are required to identify specific units set aside for higher-income households in perpetuity rather than on a property-wide percentage basis. This complicates unit allocation issues among eligible applicants with respect to floor plan size, bedroom count/accessibility and materially increases the cost of IRS compliance.

The efficacy of income averaging may be enhanced, however, by actively marketing to tenants with HCVs. Layering subsidies in this way is not ideal, but tenants with vouchers can elevate property rent revenues while maintaining compliance with tenant income tests. For example, voucher tenants earning less than 40 percent of AMI might pay 30 percent of their household income for rent and employ a voucher to offset the shortfall from the 40 percent tax credit rent, which in most cases falls below the permissible HCV maximum amount. To encourage this practice, credit allocating agencies should consider awarding bonus scoring benefits to applicants that actively market to voucher tenants and provide relocation assistance.

Income averaging also may help create a full affordable-income continuum within a property, which can facilitate addition of a market-rate component. A market-rate element can generate a cross-subsidy to support the affordable component and make projects more readily accepted by resource-rich communities.  Although the mixed-income approach is not a panacea, as elucidated by social scientist Mark Joseph and others,[ii] intensified mixed-income development appears to be the most promising approach to increasing the stock of low-income housing in high-opportunity areas or, conversely, attracting higher-income tenants to neighborhoods undergoing community revitalization.

Attracting market-rate tenants to mixed-income developments is not a simple undertaking, and many LIHTC developers and investors are reluctant to pursue the option due to a perception of increased exposure to risks associated with renting units at higher rent levels. But experience and data indicate that mixed-income community performance does not differ materially from comparable conventional market-rate options, in contrast to widely held opinion. Mixed-income projects, in fact, are economically viable and can forward social policy goals.

— By Daniel J. Hogan, Lument Managing Director for Research. Lument is a content partner of REBusinessOnline. The views expressed herein are those of the author and do not necessarily reflect the views of Lument or of the author’s colleagues at Lument.