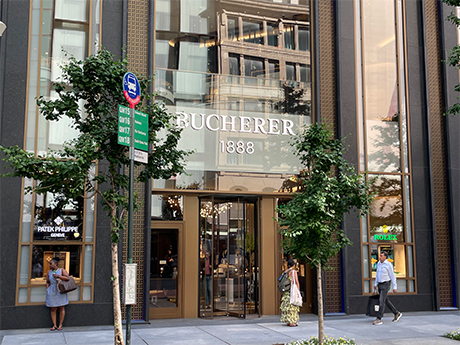 Pictured is the storefront of Bucherer, a Swiss watchmaker that was founded in 1888 and is an authorized Rolex dealer. The company's store at 590 Madison Avenue features a full-service bar, a testament to the revived destinational status of this retail corridor.

When Barneys New York department store closed in 2020, we saw a dramatic relocation of luxury retail on Madison Avenue to the south, apparently with a common goal of establishing better proximity to East 57th Street. Prior to that event, many luxury brands enjoyed a shop within a shop at Barneys, plus another store on the corridor, usually further uptown.

Prior to the COVID-19 pandemic, this stretch of Madison Avenue was so tight for space that we saw East 59th Street, a major side street, securing tenants like Dior, Bathing Ape and Balmain.

During the pandemic’s lockdown phases, retail vacancy rose dramatically, even in the most desirable areas. Now, post-pandemic, we see spaces along Madison Avenue getting filled by new and established luxury retailers ready to make a statement. Here are some of the key transactions that have either been recently completed or are in progress:

Some notable building sales in 2021-2022 are as follows, courtesy of CoStar Grooup:

JAACRES is a boutique commercial real estate brokerage firm. President Joseph Aquino has more than 35 years of experience in the luxury retail marketplace.