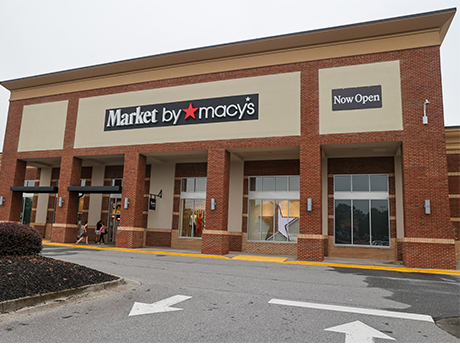 The new Market by Macy's at Johns Creek Town Center in Suwanee, Ga., is the third location for the concept in the metro Atlanta area.

SUWANEE, GA. — Macy’s has opened its “off-mall” store concept, Market by Macy’s, in the metro Atlanta area. The 30,000-square-foot store is located within Johns Creek Town Center at 3630 Peachtree Parkway in Suwanee, a northeast suburb of Atlanta in Gwinnett County. The store, the third Markey by Macy’s in the Atlanta area, includes a rotating installation of apparel called “Trend Village,” a Toys ‘R’ Us store-within-a-store and home décor and cosmetics departments. By the end of the year, Macy’s plans to expand Market by Macy’s to eight total locations, including new stores coming to metro St. Louis and Chicago, as well as a couple stores in the Dallas-Fort Worth area.