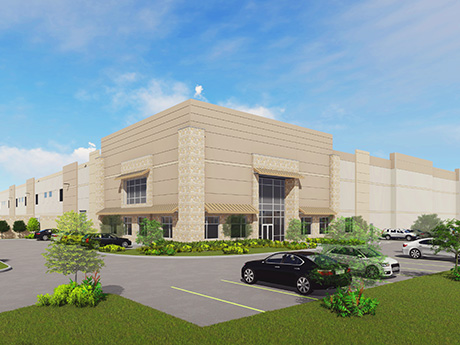 Pictured is one of the buildings at Sunnyvale Business Center, a 598,760-square-foot complex located on the eastern outskirts of Dallas. Paladin Partners provides leasing services for the property, which offers the standard array of building features — high clear heights, cross-dock configuration, ample trailer parking — that e-commerce users demand.

Just 20 years ago, the conventional wisdom and commonly held belief throughout the Dallas commercial real estate scene was that office and retail were preferable sectors to be in versus industrial. Looking back and reflecting on how industrial has gone from ugly duckling to white swan in just 20 short years, we can’t help but be glad that we didn’t take that advice.

Led by Amazon, e-commerce has truly changed the world, and certainly industrial real estate by extension.  Everyone talks about how e-commerce is what’s driving the explosion of warehouse and distribution center development and absorption across Dallas-Fort Worth (DFW) and beyond. But the fact of the matter is, e-commerce still only accounts for about 14 percent of total retail sales, according to data from the U.S. Census Bureau.

Think about that for a moment — the current proportion of 14 percent leaves a tremendous amount of room for additional growth. Demand for warehouse and distribution space is through the roof; developers can’t build warehouses fast enough these days, and yet the market is nowhere close to reaching its peak.

Even before the pandemic, this was a pretty hot market. Deal velocity stalled briefly with the larger shutdown at the onset of COVID-19 but quickly resumed a torrid pace that carried over into and even accelerated in 2021.

Not only are we seeing this in Dallas and other major metros in Texas, but we are also seeing this in the secondary and tertiary markets. Paladin Partners recently negotiated the sale of an industrial property in a small town in Oklahoma that had been on the market for less than 30 days yet was the subject of an intense bidding war between two owner-occupiers.

Over the years of tracking large industrial properties in small towns throughout the Southwest, we’ve seen buildings that have sat on the market for nearly 10 years. Now, in some cases, we see them sell two or even three times in less than two or three years. Some of these price points would normally have only been seen in big cities.

This price appreciation is driven by both user demand and appetite from investors of all types. Some of these well-capitalized investors will outbid end users as they look to take advantage of increasing returns from continued rent growth. With inflation hitting a
40-year high,  supply chain disruption persisting and material costs soaring, we don’t see this trend ending any time soon.

But while e-commerce is certainly a driver of the pent-up demand for warehouses, not enough is being talked about the other main driver of industrial development and absorption: manufacturing.

A movement to return production and origination of American goods and services stateside that began five years ago with the presidency of Donald Trump and his “Make America Great Again” initiative is now actually happening — and in a big way.

Recent manufacturing expansion announcements have been made by users such as Texas Instruments, Samsung, MP Materials, Wallbox, Sherwood Bedding, Corsicana Mattress, John Manville and Tesla. These are but a few of those that are committing to Dallas and Texas as a whole.

Corporate America never moves quickly, and it’s taken this long to figure out how to “onshore” or “nearshore” manufacturing back to the United States and North America.

Also fueling the fire of the increased manufacturing relocations are the massive supply chain interruptions that arose due to COVID-19 and the continual congestion delays in port markets, most notably Los Angeles/Long Beach. The flight of manufacturers from the Far East to business-friendly states is happening in massive waves, and DFW and Texas are at the center of all of it.

Less than two years ago, the majority of the conversations that we had with economic development departments throughout the metroplex regarding large-scale industrial projects were centered on logistics and/or distribution deals and users. Fast forward to today, and the cities that have excellent blue-collar labor supplies are seeing a complete reversal.

Now, we see that the bulk of those deals are manufacturing in nature due to the strong labor pools in these areas. Manufacturing brings jobs, and these cities could not be happier with these new pursuits hitting their economies.

Onshoring is just now heating up, but let’s not forget nearshoring and how that also impacts industrial real estate. More inexpensive goods don’t make sense to manufacture in the United States due to our labor costs, but they do work in Mexico, where labor is cheaper. Mexico will be a big beneficiary of the exodus of companies and manufacturing from the Far East.

Many cities in Mexico have strong manufacturing histories with sister towns along the Texas border — McAllen/Reynosa, Laredo/Nuevo Laredo, El Paso/Ciudad Juarez — and that is exploding today.

This growth is not only attributable to labor costs, but also to ongoing supply chain interruptions and escalating logistical costs and challenges from the Far East. From the border region of Texas, within a day’s truck drive, a company’s goods can reach its main distribution center in DFW and be delivered on to the final customers.

Given that products manufactured in the Far East are subject to long boat rides and the ongoing 60- to 90-day delays at the Port of LA/Long Beach, many U.S. companies may see these conditions as opportunities to bring their manufacturing operations back home. With all this additional manufacturing activity heading to Mexico, there should be an even greater need for supplementary distribution center space in DFW and beyond.

Between the already white-hot pace of development and absorption due to e-commerce and the potentially imminent contributions of manufacturing growth in North America, it’s as if the rich are getting richer in the world of industrial real estate. Rental rates, escalations and sales prices are at unprecedented highs, and cap rates are hovering around 3.5 percent for Class A industrial product in the metroplex.

In addition, vacancy rates are now at record lows across numerous submarkets, and tenants are literally fighting over spaces as if they were single-family homes. Speed of decision making is imperative at the corporate level, lest users run the risk of missing out on a lease or purchase opportunity to a competitor.

Everyone continues to ask, “When is it going to slow down?” While we believe most real estate trends are cyclical, it’s hard to imagine demand for industrial product in DFW and Texas slowing down. Given what is occurring in e-commerce and manufacturing, as well as the explosion of net migration of companies and people fleeing over-taxed and over-regulated states, DFW and Texas are poised to continue to flourish for years to come.