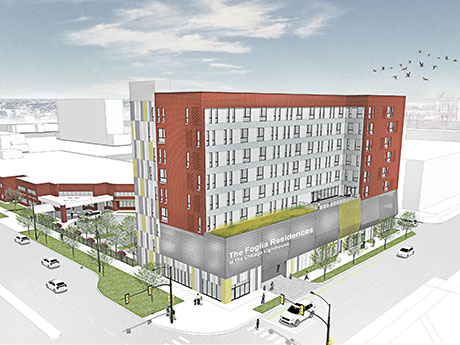 The nine-story project will also feature retail space and three levels of parking.

CHICAGO — A joint venture between McShane Construction Co. and Ashlaur Construction has broken ground on The Foglia Residences at The Chicago Lighthouse. Brinshore Development and The Chicago Lighthouse are the developers. The new development will feature 76 affordable housing units for residents who are blind, visually impaired, disabled or veterans. The project will be the first Low-Income Housing Tax Credit building in the nation for the blind community, according to the development team.

Positioned adjacent to The Chicago Lighthouse’s current center in the Illinois Medical District, the nine-story building will feature three levels of parking and first-floor retail space. Amenities will include a fitness center, community room, dog run and fourth-floor rooftop terrace. To make the residences fully accessible for its tenants, the common areas will offer contrasting colors, lit braille unit signage, handrails on both sides of the corridors and braille wallpaper. Completion is slated for May 2024. LBBA is the architect.