Posted on May 19, 2022 by Katie Sloan in Development, Florida, Multifamily, Southeast, Top Stories 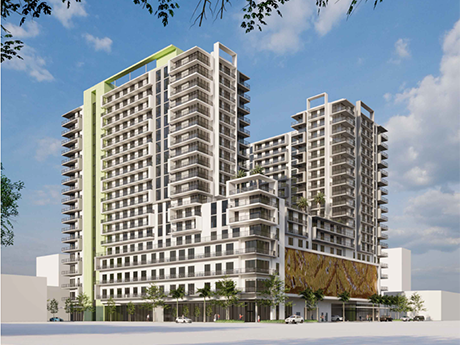 Merrick Parc will offer 450 luxury units in one- and two-bedroom configurations in Coral Gables, Fla.

Designed by Behar & Font, the 43,785-square-foot community will offer 450 rental units in one- and two-bedroom configurations alongside ground-floor retail space. The development site is located four miles from Miami International Airport and five miles away from downtown Miami’s Brickell neighborhood.

The developers partnered with Colliers to finance an initial $24 million tranche with an additional $13 million in equity financing for the project, a timeline for which was not announced. The initial land acquisition was funded by S3 Capital and closed in late April.

Demand is high for luxury rental units in the Miami and Coral Gables areas, according to Alirio Torrealba, CEO and founder of MG Developer. The company is currently developing a 10-story multifamily project in Hialeah, roughly 11 miles outside Miami, and is preparing to break ground on another 48-unit community in Coral Gables named Gables Village.

A number of additional multifamily projects have been recently announced in the Miami area, including a $220 million mixed-use project by Shoma Group; The Kavista, a 282-unit, eight-story multifamily project by Barrington Brothers; and Avida Aventura, a 266-unit apartment project by Fifield Cos., all located in Miami.

Based locally in Coral Gables, MG Developer is a subsidiary of MG Capital specializing in the development of residential communities.

New York City-based Baron Property Group specializes in the development of high-rise multifamily and hospitality properties locally in New York and in California.