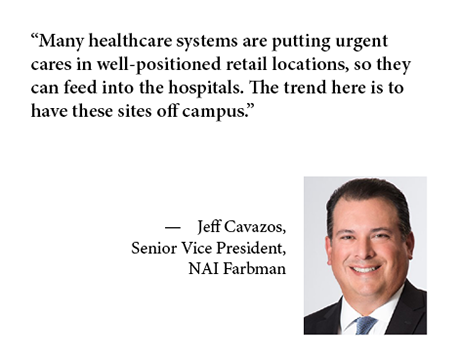 The famed stability of healthcare and medical office building (MOB) real estate continues in 2022, with the Midwest acting as a microcosm for the sector’s trends and challenges nationwide. Adapting to complement large healthcare system needs, adding urgent care centers and keeping costs low are some of the main concerns for brokers this space.

REBusiness: What trends are we going to see in healthcare in 2022? What factors might influence further investment in this field?

Matt Gregory: Improvements to building infrastructure will be the most significant trend in 2022. There will be a push toward better HVAC filtration, higher cleaning standards and so forth.

Mike Simpson: Yes, I think the healthy building initiative is something that’s going to pick up more momentum this year.

Doug Taatjes: In our market, West Michigan, there are three major hospitals. One of the continuing trends is that as the hospitals grow, the movement is to create satellite, medical office buildings that are new and modern, eliminating older, smaller hospitals. There’s a drive to serve clients with these “satellite” medical office buildings that are 15,000 to 20,000 square feet.

We are seeing surgery hubs increase their capabilities where they can even keep some patients overnight. However, for most of these procedures, knee and hip replacements and dermatological surgery, these surgeries don’t require overnight hospitalization. So, these procedures are moving to these surgery centers, especially for dermatology concerns where patients have had trouble getting access to the surgery options they need.

We’ve recently developed a sizable medical office building of 40,000 feet, and about half of it is for dermatology.

Jeff Cavazos: The trend over the last couple years has been for larger medical practices to build their own MOBs/surgical centers separate from the health systems. The systems have picked up on the trend and they’re planning/hopeful to become joint venture partners with these medical groups to keep them close to the health system network despite being physically outside of the hospital.

As Doug mentioned, you’re going to see a lot of the medical facilities outside of the hospital, as opposed to bringing clients into the hospital. It’s more convenient for people having surgeries to be able to get in and out, and there are fewer issues with infection.

REBusiness: Where are you seeing these centers set up and how close are they to hospitals?

Matt Gregory: In terms of location, it’s really about access. We are seeing more “close to home” centers in suburban areas along with centralized locations closer to hospitals. The more locations and access, the better.

Michael Kalil: There’s not really an answer that fits all systems. Some healthcare systems prefer to own, some will lease because of capital constraints.

Some healthcare systems have been much more aggressive on the development side. Henry Ford Health System has been building large medical centers. In the last three years they have developed approximately a half dozen 250,000-square-foot medical centers through a developer, so those spaces are leased.

Beaumont Health (merged with Spectrum Health) has developed much of their space on their own. In those situations, the space is all for the health care system. We’re seeing more of this approach in general.

Matt Gregory: In Columbus, between 2012 and 2018, we experienced a development renaissance for private physician practices. Since then, however, almost all developments we’ve seen have been hospital driven, with hospital systems either expanding their campuses or building new campuses.

However, there are a few exceptions. Central Ohio Primary Care is a large, physician-owned practice that built a new $18 million, 100,000-square foot headquarters last year in one of the area suburbs and brought a lot of services in-house.

The majority of new developments however are typically 50 to 60 percent pre-leased with the anchor tenant being a part owner in the building and a handful of tenants leasing the remainder of the building.

REBusiness: What can you tell us about rental rates for healthcare and MOB?

Jeff Cavazos: Our numbers are a little higher in Michigan, but I would agree that construction is certainly the biggest hurdle. Construction costs have gone up drastically in the last six months. We’ve had to change some bids/rates and add some years on to the lease term, as most of the systems around here do not want to incur capital costs.

REBusiness: What have you seen in leasing velocity for this sector?

I would say demand is probably slightly down, but the market is all being driven by the hospitals. Everyone is following the hospital’s development. Wherever the hospitals are building and signing, that’s where the tenants are signing.

Doug Taatjes: I would concur with mental health as growing areas of demand, including facilities specializing in autism. There seems to be a huge demand for that that sector right now.