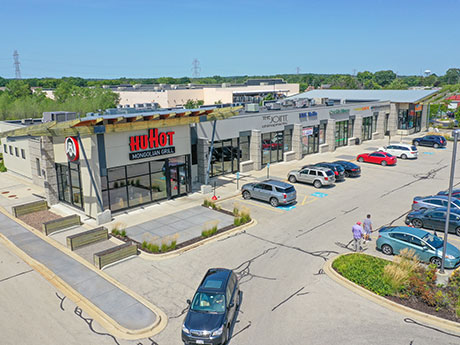 Earlier this year, a Milwaukee-based private developer sold this 14,079-square-foot retail center in the Milwaukee suburb of West Allis for $4.3 million. Some of the tenants at the fully leased center include HuHot, Tropical Smoothie Café and AT&T.

Milwaukee is a city known for beer, motorcycles, basketball and blue-collar workers. However, Milwaukee should also be known for having a strong retail marketplace as well. With ever-changing markets and trends, retailers are finding many ways to get creative and adapt with the trends. Due to the adaptation, the competition for prime outlots is at an all-time high and does not appear to be changing any time soon.

It’s with absolute certainly that the Milwaukee retail market has seen a massive influx for prime outlots. So much so that the phrase “outlot wars” is regularly used when describing retail outlot developments and redevelopments. In an already saturated segment of retail real estate, we have seen many new concepts/categories pushing to secure premium outlot sites in the market. Quick-service restaurants (QSRs) and fast-casual restaurants, auto and financial institutions are the biggest participants to date.

Since the beginning of the COVID pandemic in 2020, we have seen a pretty significant shift in the food category from QSR and fast-casual concepts alike. Milwaukee has seen many existing concepts continue to expand or reposition within a market, but we have also seen new concepts making a push to enter the market as well. Some of the QSR/fast-casual users include, but are not limited to: Qdoba, Panera Bread, Tropical Smoothie Café, Burger King, Mission BBQ, City BBQ, Culver’s and Freddy’s Frozen Custard and Steakburgers.

In addition, we have seen a big push in chicken concepts as well, which have pivoted into their own sub-category. Some of the chicken users include: Chick-fil-A, Slim Chickens, Dave’s Hot Chicken, Popeyes, Raising Cane’s, Buffalo Wild Wings Go and Wingstop. With limited outlot opportunities, it’s evident why this “war” has started, and will continue to be around for quite some time.

Unfortunately for the QSR/fast-casual users and financial institutions, there is another major sub-category that is constantly competing for the same sites as well. Jiffy Lube, Discount Tire, Take 5, Coast Car Wash, Tidal Wave, Mr. Splash, Mister Car Wash, Kwik Trip, 7/11 and Speedway are all active and battling for the same sites. Most of these groups have very strong preferences to purchase their real estate, but we have seen groups such as Take 5 who are willing to entertain ground leases for the right site.

We have also seen groups such as Coast Car Wash buy a bigger site than it needs and flip a portion of the site to another user just so it can enter a market as sites have been difficult to find.

The Coast Car Wash located at 10901 W. Lapham St. in West Allis, Wisconsin, bought the former AMF Bowling Center, which was just over five acres. Coast Car Wash retained two acres for the car wash, and then sold the remaining three acres to Kwik Trip. This is a good example of some of the adaptation and creativity that we are going to continue to see from these users to ensure that they can enter the Milwaukee market.

Due to the increasing demand for prime outlots, along with a continually growing category and user base, we have seen some of these retailers look harder into ground leases. Just three short years ago in 2019, it was uncommon to hear of any retailers considering a ground lease. They primarily focused on purchases or build-to-suits for outlots.

One of the biggest adaptations Milwaukee has seen since the pandemic is the importance of a drive-thru. Many of the food users who previously did not need a drive-thru really shifted focus on looking for new sites with a drive-thru, or a pickup window at a minimum. It’s been discussed that many of the QSRs were doing upwards of 20 to 30 percent above same-store sales from the previous year by and large due to the drive-thru.

Many users, such as Culver’s and McDonald’s, adapted to the Chick-fil-A model and switched to a double drive-thru to help keep drive-thru orders as efficient as possible, and help accommodate the massive increase in drive-thru ordering. Because of the success of drive-thrus, we are seeing groups such as Cousins Subs, Subway, Jersey Mike’s, Noodles & Co., Chipotle, Qdoba and many others shifting to requiring a drive-thru or pickup window, which in turn, has caused a premium on rental rates for a drive-thru end cap or a freestanding building with a drive-thru.

Another category that has been adapting is the coffee segment. Groups such as Scooter’s Coffee and Caribou Coffee have been searching the markets for small +/- .25-acre outlots for a kiosk coffee shop.  The intention behind them is to be drive-thru- only. Most of the buildings range in the 400- to 600-square-foot range and can fit in very tight layouts. They are shifting away from the typical 2,000- to 2,500-square-foot sit-down coffee shop and into this new kiosk concept to keep overhead low, but still utilize the drive-thru, which is the driving factor behind most of their sales.

However, because of the difficulty associated with finding small outlots for purchase, these groups have started looking at ground lease opportunities as well in an effort to enter certain markets.

There seems to be a stigma that retail is dying and that simply is not the truth. Retail is all about adapting to your surroundings and trying to stay ahead of “what’s next.” Those groups that can adapt and see the change before it happens will prevail, but those who wait for the shift and try to react will find themselves on the outside looking in.

Jay Blom is a retail broker with Founders 3 Real Estate. This article originally appeared in the May 2022 issue of Heartland Real Estate Business magazine.