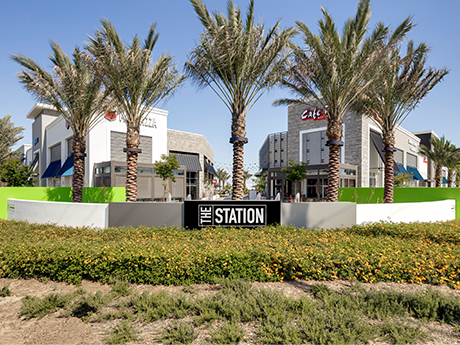 The Station is the 60-acre retail component of Goodman Commerce Center, It will include a 650,000-square-foot power center. (Credit Goodman Birtcher)

Mixed-use industrial has become a significant economic driver in the Inland Empire. Cities are benefiting from business synergies, additional tax revenue, high-quality design and civic engagement that builds community. The recent mixed-use trend can be attributed to one key change: the significant growth in size and scale of industrial master plans over the past few decades, combined with a new approach to industrial as a partial result of the pandemic.

After the 2008 financial crisis, the U.S. economy has managed to make a comeback in ways that are unique and new to the commercial real estate industry, specifically in the mixed-use industrial sector. The Inland Empire — historically regarded as a key industrial market — saw record-level demand for industrial space as online sales surged during the pandemic. A few notable projects that highlight this mixed-use industrial trend include:

The Goodman Commerce Center in Eastvale is a mixed-use development that accommodates 2.4 million square feet of industrial use in three buildings. It also contains a 180,300-square-foot business park and a 650,000 square-foot community shopping center with dining and hospitality, all spanning across 205 acres. This master-planned site by AO is a great example of how an originally intended purely industrial project was reimagined into a mixed-use property with retail components. This project can now cater to new users with a high-performance motorsports track, office, schools, and food and beverage outlets. This brings a tremendous advantage to the city based off new job creation and tax benefits, with additional traffic drawing in users to the site.

The $3 billion World Logistics Center in Moreno Valley is a state-of-the-art, next-generation logistics center that will be the largest master-planned logistics park in the nation with 40 million square feet of facilities. Plans are for conformance with California’s Cal-Green building regulations, the most stringent, environmentally friendly building code in the United States. The property will generate substantial tax earnings for the city and nearby residents due to its sheer size alone.

AO is also designing the Ranch at Eastvale, a 115-acre site that will include fast food pads, in-line retail buildings, a gas station, restaurants and 100,000 square feet of multi-tenant industrial product. Four additional industrial mixed-use master plans are in progress (planning entitlements) in Jurupa Valley, Chino and the County of Riverside.

Mixing industrial product with retail, office, restaurants and other uses creates a synergy that benefits businesses, workers, communities and cities. The thousands of industrial employees become patrons to nearby shopping, dining and services, especially when a walkable pedestrian network is created.

Setting forth a vision to satisfy all stakeholders when working on industrial mixed-use properties requires a higher design articulation than industrial-only sites. Designers need to consider the human element in new ways, balancing logistical practicality with aesthetic appeal. The transitional spaces between the industry, retail and public areas can be addressed with thoughtful arterial design, including landscaping and landscaping setbacks, sidewalks or sitting areas. A cohesive architectural narrative can be achieved by using highly appealing materials, such as glass on the industrial buildings that face retail. Private driveways with tree-lined paths create a more intimate feeling for users, similar to that of a promenade. These elements create a cohesive community feel and achieve an elevated design beyond the typical industrial park.

Carefully planned circulation patterns can promote interaction, as well as distinguish the industrial and public spaces. While beautifying the interfacing spaces enables a smooth, conflict-free transition between housing, industrial and retail uses, industrial functionality can be maintained by thoughtful building and traffic design. Segregating trucking against the edge of the property allows for full industrial site capabilities while remaining clear of public zones. When feasible, placing retail along the freeway creates added visibility for visitors beyond the industrial ecosystem, which further promotes the benefits the city has to offer.

The trend of industrial mixed-use development will continue to expand, establishing itself as a major economic driver, particularly in the Inland Empire. Because of the sheer scale of these master plans, it is imperative that cities and developers rely on the expertise of architects and consultants that fully understand industrial and mixed-use design, and how they should best integrate. There is tremendous opportunity and long-term potential for mixed-use industrial to strengthen our cities and communities for generations to come.