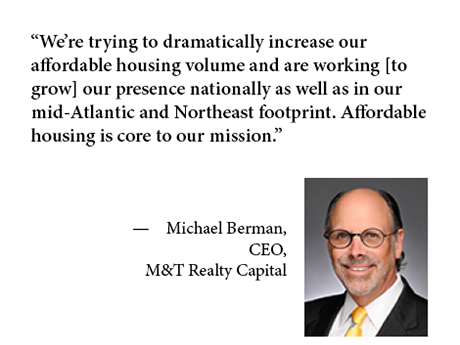 M&T Realty Capital Corp. is beginning 2022 with ambitious plans to increase its multifamily financings as part of an effort to double its real estate loan volume over the next two to three years. To achieve those goals, it is leveraging a new leadership structure and a recently announced strategic partnership with the Marcus & Millichap Capital Corp.

M&T Realty Capital, M&T Bank’s commercial mortgage banking subsidiary, recorded $5.1 billion in loan volume in 2021, a level that was just below its high watermark of $5.2 billion in 2019, says Michael Berman, CEO of M&T Realty Capital. Multifamily loans made up of the lion’s share of financings, he adds, and the sector provides a significant growth opportunity going forward.

“Multifamily is a hot a sector right now — everyone is trying to invest in it,” he says. “It’s just an extraordinarily healthy asset class because of its supply and demand dynamics.”

Indeed, the U.S. apartment market enjoyed a banner year in 2021 across all measures. Investment volume reached a record $335.3 billion, nearly 75 percent above the record volume of $193.1 billion posted in 2019, according to commercial real estate brokerage CBRE.

Meanwhile, renters absorbed 617,500 apartment units in 2021, another record, CBRE reports, and the average apartment vacancy rate of 2.5 percent at the end of the year represented a decline of 2.2 percentage points from 12 months earlier. Those conditions, created largely by a jobs recovery, wage growth and rising household formation, helped push up net effective rents by an average 13.4 percent in the fourth quarter compared to a year earlier.

To capitalize on that momentum — and to increase its book of real estate business overall — M&T Realty Capital promoted Mike Edelman to president in January. He joins Berman, who became CEO in April 2019, and Christine Chandler, COO and chief credit officer, in an effort to lead the organization to the next level of growth.

M&T Realty Capital continues to focus on serving M&T Bank balance sheet borrowers who are transitioning from construction or bridge loans to permanent debt — a source of $2.3 billion in loan volume in 2021. It is also bringing more life insurance companies and debt funds into its universe while increasing business with Fannie Mae, Freddie Mac and the Department of Housing and Urban Development (HUD).

Its strategic alliance with Marcus & Millichap’s financing subsidiary, specifically focusing on multifamily deals of around $10 million or more, is another key part of the strategy of building up its volume, Edelman says.

“Leveraging the sales market through the Marcus & Millichap partnership is going to be a huge opportunity for us,” Edelman explains. “We continue to see growth in demand for apartments from renters as well as investors. And we feel that this is a big way that we can take advantage of that market and increase the amount of volume that we do annually.”

What’s more, M&T Bank’s merger with People’s United Bank, which recently received regulatory approval, will help solidify its traditional Mid-Atlantic and New England base. Still, the bank’s expansion into Florida and in the Pacific Northwest over the last few years, along with its partnership with Marcus & Millichap, provides M&T Realty Capital with the ability to augment its presence in those areas and to expand into Texas, the Midwest and West, Edelman says.

“We anticipate a lot more business coming our way in the coming years,” he adds.

M&T Realty Capital is also ramping up its affordable housing business, Berman says, and has hired a dozen new people in the department over the last 20 months. In 2021, the mortgage bank provided almost $1.8 billion in debt and $178 million in low-income housing tax credit (LIHTC) funds to affordable housing developers.

“We’re trying to dramatically increase our affordable housing volume and are working hand-in-glove with the bank to grow our presence nationally as well as in our mid-Atlantic and Northeast footprint,” he explains. “Affordable housing is core to our mission.”

“The bank has the benefit of knowing that permanent financing is already in place,” she adds. “It’s a holistic approach that we take when we’re working with customers.”

All loans are subject to receipt of a completed application, credit approval and other conditions.

M&T and People’s United provide further detail regarding these risks and uncertainties in their respective latest Form 10-Ks and subsequent Form 10-Qs, including in the respective Risk Factors sections of such reports, as well as in subsequent SEC filings. Forward-looking statements speak only as of the date made, and neither M&T nor People’s United assumes any duty and does not undertake to update forward-looking statements

In addition, the following factors, among others, related to the proposed transaction between M&T and People’s United, could cause actual outcomes and results to differ materially from forward-looking statements or historical performance: the occurrence of any event, change or other circumstances that could give rise to the right of one or both of the parties to terminate the definitive merger agreement between M&T and People’s United; the outcome of any legal proceedings that may be instituted against M&T or People’s United; the possibility that the proposed transaction will not close when expected or at all because certain conditions to the closing are not satisfied on a timely basis or at all; the risk that any announcements relating to the proposed combination could have adverse effects on the market price of the common stock of either or both parties to the combination; the possibility that the anticipated benefits of the transaction will not be realized when expected or at all, including as a result of the impact of, or problems arising from, the integration of the two companies or as a result of the strength of the economy and competitive factors in the areas where M&T and People’s United do business; certain restrictions during the pendency of the merger.