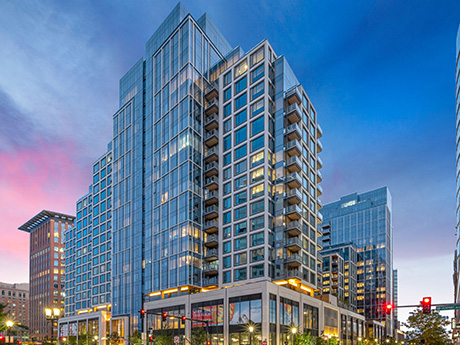 Pictured is EchelonSeaport, Cottonwood Group's signature multifamily project in Boston's Seaport District. In constructing the project, the developer took extra engineering precautions to safeguard the property against inclement weather hazards that come with being located in a waterfront community.

As one of Boston’s fastest-growing and most dynamic areas, the Seaport District has gotten a lot of attention as it has undergone a multitude of transformations over the past 150 years.

The area has evolved from a bustling railyard and shipping area in the early 20th century to a no-man’s land of parking lots in the 1990s to its most recent iteration: The Innovation District. While the spotlight is only growing brighter as several high-profile residential and mixed-use projects come on line in this distinctive and in-demand neighborhood, the headlines tell only part of the story.

The Seaport District’s seemingly sudden emergence is the result of more than a decade of development and over $22 billion in public funding — efforts that have helped draw hundreds of new businesses and support a growing list of noteworthy developments.

The challenges faced and opportunities realized by developers in this part of town reveal some important truths about what it takes to create great civic spaces and successful multifamily developments — not just in this city and this area, but in urban communities around the country.

What follows are some best practices, consideration and lessons learned about creating multifamily magic in Boston’s growing Seaport District.

One of the unmistakable trends in multifamily development — especially high-end urban multifamily product — has been an amenities arms race. Developers compete to offer the latest and greatest creative spaces and lifestyle luxuries that appeal to potential residents and stand out from the competition.

That dynamic is apparent in some of the Seaport District’s latest multifamily additions, such as Cottonwood Group’s 3.5-acre EchelonSeaport development. The project exemplifies urban resort living in Boston’s most vibrant neighborhood, touting sophisticated high-end amenities and a curated residential lifestyle as key selling points.

Cottonwood, which both developed and manages the project, has introduced a condo and apartment product that doesn’t just have now standard details and conveniences like programmable thermostats, a 24-hour concierge and a resident lounge, but also bigger and more dramatic offerings. The project, comprised of two condo towers and one multifamily tower, resides above two floors of street-level retail and features more than 60,000 square feet of indoor and outdoor amenity space.

As its name suggests, the Seaport District, like so much of Boston, is in close proximity to the waterfront. The potential for higher tides, storm-related flooding and other issues presented by environmental changes must be accounted for in the design and development process.

With this in mind, Cottonwood proactively incorporated construction and design elements to further enhance EchelonSeaport’s natural protective advantages by locating mechanical equipment on the roof, designing first floors and basements to be more weather-resistant and putting systems in place with water-tight barriers that can be deployed in advance of a storm or other concerning weather events.

In September 2021, the Boston Planning & Development Agency formally ratified new regulations designed to ensure that many new or updated structures across the city will be more resilient to future water incursions from storms and high tides. The Seaport District is one of many Boston neighborhoods in which “occupiable space in residential buildings would need to be at least two feet above” the anticipated 40-inch sea level rise that could result from a storm. Similar rules apply to commercial buildings, housing, offices and laboratories.

Developers in four-season cities like Boston also need to think strategically and creatively about how to provide a smart balance of indoor and outdoor amenities when much of the year can be cold and snowy. The trick is balancing the need to provide outdoor living options for residents without over-investing in spaces that are unlikely to be utilized for half the year.

Despite the need for more high-quality multifamily projects throughout the city, ground-floor retail is still very important as it helps to animate and activate the street scene and offers a richer palette of live-work-play options that enliven urban residential offerings.

We see this in action throughout the Seaport, something that is only becoming more evident now as COVID-19 restrictions begin to ease. Compared to other parts of Boston, like the Financial District, which can be quite empty in the middle of the day, the Seaport is a bustling community, with residents and workers out and about and contributing to an appealing social dynamic no matter the time of day.

Many ambitious projects in Boston have had to modify design or operations to accommodate building on or around city- or site-specific obstacles.

In the case of EchelonSeaport, Boston’s Silver Line tunnel bifurcates the project’s two parcels, eliminating the possibility of a single bathtub parking garage foundation, a standard formula for ground-up multifamily developments in Boston.

The solution was necessarily creative and included a small utility and service tunnel connecting two garages that serves as a connectivity point for utilities and other operational necessities. This was all constructed around the operating public transit tunnel without any impact on Silver Line service.

Additionally, all Seaport District projects must comply with height restrictions due to the neighborhood’s close proximity to Boston Logan International Airport. All coastal developments in Boston are also subject to design considerations to ensure that they comply with Chapter 91, the Massachusetts Public Waterfront Act designed to preserve pedestrian access along the water’s edge.

Last year, condo sales in the Seaport District surpassed an average of $1,500 per square foot, higher than Back Bay, Beacon Hill, Downtown Crossing or any other neighborhood in Boston. Mixed-use and multifamily development activity in the area remains strong thanks to continued expansion in industries like life sciences and technology.

Several noteworthy openings in 2021 added to the neighborhood’s deep slate of multifamily offerings, and more developments are in the pipeline. For example, Cronin Development is currently building out a 22-story, 114-unit mixed-use condominium development in the Seaport.

On the office side, Amazon recently leased a new 17-story office tower in the Seaport, a 630,000-square-foot space to be completed in 2024 that will expand the tech giant’s Boston presence by 3,000 employees. Iconic brands like GE, Eli Lilly and MassMutual have all either recently opened or have work underway to open significant new spaces in the Seaport.

That said, any large-scale project in an urban market presents logistical challenges — longer timelines alone can be a challenge in a fast-moving and competitive multifamily market. New projects in the Seaport District will need to account for potential
COVID-19-related interruptions, ongoing labor and materials shortages, and the Mayor Michelle Wu’s commitment to prioritizing afforable housing in the future.

Even for a hot neighborhood like the Seaport District, a bright future is no reason to neglect thoughtful planning. Any new multifamily developers in Boston — or anywhere else — would be wise to consider these issues as they plan projects and build communities.

Becky Bedwell is Vice President of Development for Cottonwood Group. Cottonwood is a Los Angeles-based private equity real estate investment firm with offices in Boston and New York, and the developer and management firm behind EchelonSeaport and The Alyx at EchelonSeaport.