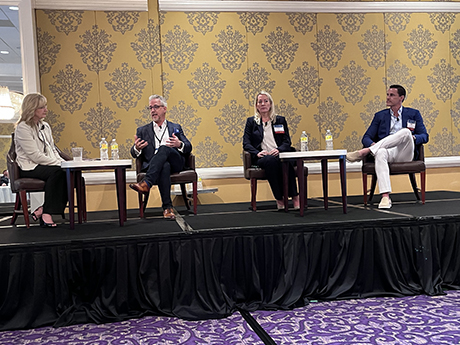 CHARLOTTE, N.C. — Property managers are navigating a minefield of issues in today’s apartment market. Analyzing renter applications for fraud, collecting overdue rent and turning over units from freeloading tenants are all in a day’s work for savvy apartment operators.

Amanda Kitts, senior vice president of property management at Northwood Ravin, a multifamily owner and operator based in North Carolina, said that part of the role of an operations professional today entails poring over documents like check stubs, IDs and employment records to make sure the prospective resident is creditworthy. She said that fraud is more prevalent in some markets than others, so it’s imperative that property managers are adequately trained.

“Charlotte still is a very big market for fraud, but Durham not so much. Chapel Hill is squeaky clean; nobody does anything wrong in Chapel Hill,” joked Kitts. “We have these applications and check stubs, and maybe one could be off, and you have to investigate and Google. We’re almost mini-FBI investigators.”

Kitts’ comments came during the leasing and operations panel at France Media’s InterFace Carolinas Multifamily, which took place April 14 at the Hilton Uptown Charlotte. The networking and information conference drew more than 260 attendees from all facets of the multifamily industry in North and South Carolina.

Kevin Owens, division president of RPM Living, a multifamily owner and operator based in Austin, noted that in some pockets of the Carolinas, 60 to 70 percent of the applications his firm receives are fraudulent, so it’s a situation that is top of mind.

“It’s really important to help our team members onsite understand what’s happening and learn to identify upfront more obvious challenges, whether it be fraudulent check stubs or an address for a business where they worked that might not actually be a building or a place where they would actually work,” said Owens. “Being able to identify red, yellow or orange flags and dig a little deeper is something that has been very successful for us.”

Panelists warned that not all fraudulent applications are forgeries. Thus, it’s vital for property managers to implement adequate software to catch inconsistencies that would go unnoticed by the naked eye. Bob Moore, managing director of Charlotte-based operator FCA Management, said that some of the paystubs that his firm have reviewed in the past are completely legitimate, but were bought on Facebook Marketplace or other forums.

“A leasing consultant’s job is not to look at a document and try to see if it’s a forgery or not. It’s just not in their job description,” said Moore. “This [new] technology has uncovered a lot of fraud that may have been there before that we didn’t see.”

While not naming specific brands or products, each of the panelists pointed out that they use multiple software platforms for background checks. They said it’s a worthwhile expense because the alternative is having tenants who can’t afford to live in the units and have no intention of ever paying or leaving.

Owens said that part of the issue stems from the national moratorium on evictions in response to the COVID-19 pandemic. While the national eviction ban expired last year and most jurisdictions don’t have an eviction ban in place today, it’s still an arduous process to remove tenants through legal channels.

“We have residents living with us today in many of our assets who were living with us in March 2020 and haven’t paid $1 in rent since that date,” said Owens. “The reality is the jurisdictions for those communities have not allowed anything to happen. The good news is that we’ve come up with some strategies to try to address that from a non-judicial standpoint.”

Kitts said Northwood Ravin is experimenting with an in-house collections division to bypass the red tape associated with traditional collection agencies. Additionally, her firm and other property management companies are doing “cash for keys,” whereby the property manager pays the renter to leave, and in some cases also offers to pay for moving and storage expenses.

“It’s worth it long term just to get the bad debt off the books,” said Owens.

The panelists said that even if landlords pursue legal action, court systems are backlogged for several months or even a full year in some jurisdictions. For example, Kitts said that her firm still doesn’t have court dates for eviction cases that were filed more than a year ago in metro Atlanta’s DeKalb County.

Help wanted
In dealing with so much fraud and some unsavory renter activity on the front lines, Owens said it’s understandable that property managers can become frustrated. He said that it can be disheartening to sign 10 leases in a week only to find out half or more were declined, which impacts leasing agents who work on commission and generally are rewarded only after the resident moves in.

“Assistant managers are getting crushed because they’re not getting their collections bonuses because people aren’t paying rent,” said Owens. “What can we do as an industry, as companies and as leaders to help keep them engaged and motivated? It ultimately impacts our clients — the developers and owners. If you don’t have great people working for you who are motivated and engaged, it’s going to be a problem.”

“We had to implement help from our front office to make sure that the onsite people didn’t feel completely deflated from having to call people and beg for their keys back because they’re still not paying rent,” said Kitts. “People matter. Our employees are always going to come first. We have to do a really good job of loving up on them for the rest of the time that they’re with us for everything that they’ve been through.”

In addition to maintaining morale, the operator needs to make the workplace enjoyable because there is a labor shortage of qualified team members. Owens said that one strategy that RPM Living has implemented is centralizing its talent base, both on the leasing and maintenance sides of the business. He said that the company has one crew centrally located that handles maintenance orders at three communities simultaneously.

“It is something that we’re looking to do because our clients are looking for ways to cut costs and to make deals pencil out better,” said Owens. “It’s our job to help them figure that out. It’s not an easy job to do.”

Kitts said that her firm has had success recruiting and training members on the leasing side but that maintenance workers are more difficult to find because there is shortage of talented, experienced technicians.

“We have always struggled with maintenance, and so we are seeing payroll completely out of whack,” said Kitts, pointing out that maintenance workers are commanding better pay and more job security as a result. The panelists concurred that they’re seeing 20-year highs for wages across the board.

“In one sense, I’m glad that they know their value,” continued Kitts. “Maybe in the past we should have been paying a little bit more for some of these jobs because of how difficult the jobs are. We have to hire people with very basic skill sets and train them as a result.”

Northwood Ravin recently established a director of training position. That person’s sole job is to train incoming and existing technicians and have them earn as many certifications as possible, said Kitts. She said ground-up training is a critical piece of the puzzle because “the labor pool is empty” for maintenance roles.

The panelists concurred that the apartment industry has largely been able to absorb the higher wages for maintenance and leasing professionals because rent growth has been so robust, especially in the Carolinas. In 2021, asking rental rates grew about 20 percent in Charlotte and Raleigh-Durham year-over-year, according to the latest data from Northmarq.

Panel moderator Teresa Devos, executive vice president of RKW Residential, asked how long rental rates will continue to increase. Eventually rent growth will slow, the panelists agreed, but they don’t see that happening anytime soon because of the limited supply of living options and a sustained high demand.

“All indicators right now are very healthy,” said Moore. “There is still not enough supply.”