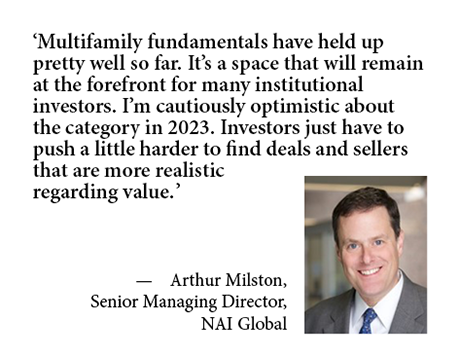 The mere flipping of the calendar to mark a new year has done nothing to inject certainty into the next 12 months. The higher cost of credit that muted commercial real estate investment sales in the second half of 2022 and the attitude of some sellers who refuse to recognize the new pricing reality remain in place in the new year.

Neither of those is likely, at least in the short term, observes Arthur Milston, a senior managing director of NAI Global in New York City. While inflation has cooled to an annual rate of 6.5 percent from a high of 9.1 percent in June, that’s still far off from the roughly 2 percent annual target that the Fed desires, he adds.

That should translate into continued tightening, Milston says, although the question is, how long will the central bank keep raising rates, and by what amount? “Trying to guess what the Fed will do is a risky proposition,” notes Milston, who is co-head of NAI’s capital markets group. “But I believe that we’ll see interest rates continue to move up.”

In all likelihood, such an environment will continue to thwart price discovery across most asset categories amid a stubborn bid-ask spread between buyers and sellers, and consequently, the lack of transactions to provide comparable sales.

Still, from a renter pool perspective, higher interest rates are only making an already difficult home buying climate more challenging and should fuel sustained, robust demand for apartments, Milston points out. Even in high-growth markets like Phoenix and Dallas, which historically have been early exhibitors of multifamily overbuilding and distress in past economic slumps, apartments continue to perform well and attract capital, he adds.

“Multifamily fundamentals have held up pretty well so far. It’s a space that will remain at the forefront for many institutional investors. I’m cautiously optimistic about the category in 2023,” he declares. “Investors just have to push a little harder to find deals and sellers that are more realistic regarding value.”

It appears that’s what apartment buyers were doing in 2022. While apartment sales in November plunged 74 percent to $11.4 billion from the prior year, the asset class saw the most investment activity by far during the month compared to other categories, according to MSCI Real Assets, which tracks deals of $2.5 million and higher.

Additionally, 11 months into the year, $272.1 billion in apartment transactions still outpaced the same period in 2021 by 3 percent and dwarfed industrial deals, the second most active sector, by nearly $135 billion.

While fourth quarters have historically been busy times for transactions as buyers and sellers rush to close deals before the end of the year, collapsed sales punctuated the quarter in 2022 after parties failed to agree on new prices to adjust for higher interest rates, Milston says.

“Ultimately, whether we’re going to be at 75 percent of the volume we did last year, or at 30 percent or 40 percent, it’s going to come down to buyers and sellers being on the same page and having price discovery as to what assets are worth,” he explains. “But apartment transactions are always taking place because of the more positive underlying fundamentals, compared to other property types.”

Despite the multifamily category’s appeal, some apartment investors could find themselves settling for leaner returns than envisioned, or even in distress, Milston cautions. That’s particularly true for highly leveraged borrowers who bet on strong rent growth to justify deals with very low single-digit returns or even negative leverage — transactions in which the debt payments are higher than the initial cash flow. While the average apartment rent in 2022 grew 6.2 percent, it was less than half of the increase in 2021, according to YardiMatrix’s December multifamily report.

Similarly, value-add investors who tapped short-term, floating-rate debt could fail to generate return expectations upon a sale or have a tough time refinancing when their loans mature. Many value-add projects are taking longer than anticipated to stabilize because of supply chain and labor shortages, Milston says. All the while, the 30-day secured overnight financing rate (SOFR), a benchmark for short-term interest rates, has spiked some 400 basis points from near zero over the last year, according to the Fed.

The potential for problems in the value-add space has all but dried up debt capital for the deals, and the financing that is still available, typically from private debt funds, is much pricier to obtain, Milston notes. More broadly, he adds, plentiful credit is available to finance apartments, but pension funds, insurance companies and other lenders have become much more discerning about deals and sponsors. They also expect to be less busy.

Fannie Mae and Freddie Mac multifamily loan purchases, for example, will be capped at $75 billion each. That’s a decline from $78 billion each in 2022, which reflects “an anticipated contraction of the multifamily originations market in 2023,” according to the Federal Housing Finance Agency.

“Fannie and Freddie are always going to be sources for multifamily financing, and institutional lenders like insurance companies have fresh allocations,” Milston says. “But it comes down to underwriting and how selective they want to be. In some cases, they’ll only work with existing clients who they have underwritten in the past.”

— By Joe Gose. This article was written in conjunction with NAI Global, a content partner of REBusinessOnline. For more articles from and news about NAI Global, click here.