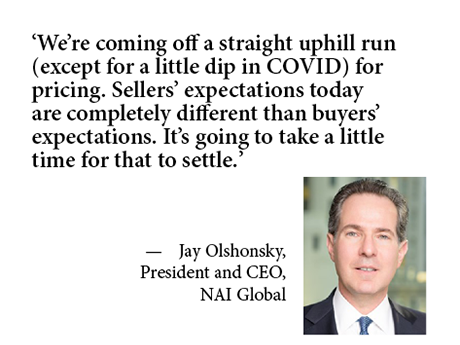 As we shift through economic uncertainty and changes in the market, commercial real estate businesses are planning for a range of scenarios — and looking to historical trends to make predictions. REBusinessOnline sat down with two industry experts to talk about how this period of uncertainty compares to previous eras and where there may be benefits and opportunities in the current landscape. Jay Olshonsky, president and CEO, and Cliff Moskowitz, executive vice president, at NAI Global spoke about the commercial real estate outlook and the challenges it is likely to face in the immediate future.

REBusiness: Looking at the current environment, how does it compare to previous periods of uncertainty? What might be the impacts on commercial real estate?

Olshonsky: To start with, we are in a recession. We’ve already had two quarters of negative GDP growth. I think the most fundamental difference between this cycle and a lot of other cycles is that we have extremely low unemployment, differentiating this moment from others, for example, 2009. Even though the most recent job numbers were lower, they were still fairly strong.

Jobs create the demand for commercial real estate at all levels, but especially at the services level. We do think that unemployment will increase, but it’s unlikely to increase exponentially in the next 15 months.

Another factor that differentiates this economic moment from previous ones is the global pandemic. COVID has already hurt the office market, particularly in urban areas like New York; Washington, D.C.; Chicago; San Francisco, etc. This is mainly because office workers in those types of places can often do their jobs from alternative locations — whether it’s working from home or moving to an area with a lower cost of living. The advent of technology — more powerful cell phones, more methods of connection and the ability to interact remotely via video meetings — means we’re in an unprecedented situation when it comes to how we work.

REBusiness: What kinds of threats do you see to the commercial real estate industry?

Moskowitz: Rising interest rates, fundamentally higher cost of debt and lower prices. Also, in between the repricing of assets, there’s always a period during which buyers and sellers don’t agree on what prices should be. This means transactions don’t happen.

The difficulty of financing properties is clearly an obstacle. Financing Class B or lower office properties is certainly a challenge. Lenders aren’t willing to take those types of properties on, given, as Jay mentioned, changing work habits.

REBusiness: What do you see as the upside to this economic and political landscape? Is anyone benefitting from this situation right now?

Olshonsky: Class A and new office products in urban areas are benefitting. There has been a flight to quality, so while there has been limited absorption, these new and Class A buildings have been leasing up quite well and in fairly good numbers. Tenants can upgrade to a more expensive building if they’re reducing their overall footprint as more people work from home.

Also, you’re starting to see tourism come back. Many hotels have recovered faster than we thought they would coming out of the pandemic. Business and convention travel is still lacking, but most occupancy rates and the pricing on both airlines and hotels is higher (though some of the pricing increases are only due to inflation).

Multifamily is doing well. Because of interest rate changes, borrowing to purchase a home has become much more expensive. A lot of people are going to stay in their apartments. We’ve seen tremendous rent growth just about everywhere for apartments, and many people have moved back to the cities that they left during the pandemic.

Medical office space has also done fairly well, and you can’t ignore industrial. Industrial was the darling for almost a decade. Coming out of the pandemic, we have a huge industrial base. A lot of our industrial brokers now say all the retailers are gobbling up all the distribution and logistics space that companies like Amazon or that logistics companies have left behind.

Moskowitz: To add to Jay’s point, this landscape is also an opportunity for cash buyers. A lot of these companies have projections based upon levered returns. Levered returns will obviously decrease as the cost of financing increases. That could be an opportunity for some of the cash buyers out there to get some really good pricing on some assets.

REBusiness: Institutional investors have been sitting on the sidelines to a degree. Do you see an opportunity for them, since they’re so well capitalized?

Moskowitz: Yes. They’ll be more precise in what they’re buying, depending on who that institutional player is and what their focus is. But there certainly will be opportunity. It’s just a question of whether that opportunity is in six months or 12 months or 18 months.

Olshonsky: There is no question that there’s a ton of money that’s been allocated for real estate that’s sitting on the sidelines. Some of it has been deployed. There have been people buying hotels in New York City at 50 to 70 percent discounts, because that’s their business model.

But Cliff’s right: the other big problem we have right now is that there’s a disconnect. We’re coming off a straight uphill run (except for a little dip in COVID) for pricing. Sellers’ expectations today are completely different than buyers’ expectations for all the things we’ve mentioned — the cost of capital has increased and not everyone is a cash buyer (where buyers could expect a discount). It’s going to take a little time for that to settle.

Plus, at some level, there will be some pain in the marketplace, particularly in office buildings. If they’re at a 30 or 40 percent occupancy, plus corporate meeting space that’s going unused, you’re not going to have a lot of absorption of B and C Class buildings. If they have commercial bank mortgage debt on them, they’re going to be in servicing. That’s going to create loan sales and sales of buildings at a discount.

Still, I’ve been doing this long enough to know that nothing lasts forever, and the pendulum will always swing back. Any return to office will probably be led by tech office users in some form or another. It’s quite possible that in 2026 or 2027 we could be back to pre-pandemic occupancy levels, availabilities and vacancies.

REBusiness: Tell me about lenders — they’ve also been sitting on the sidelines. Do the markets have any hope of thawing as we leave 2022 and begin 2023?

Moskowitz: I think that’s going to continue to be a challenge for a lot of the reasons we’ve outlined. However, there are certainly some asset classes that have some leeway. Interesting asset classes out there include things like life sciences, data centers and cold storage. Certainly, multifamily and single-family residential portfolios have been hot as well. But for some of the other asset classes, there’s going to be a slow slog for a while.

Olshonsky: Agreed, although we should keep in mind that at some level this is a very asset- or market-specific question. Some considerations are just a function of people reviewing their situation and asking themselves if they have recourse debt or non-recourse debt. What will be the tax implications of walking away from that debt?

There will be people that will step in. There will be lenders that are going to step in at some point too — the lenders are going to need their yields also. But as the market adjusts, the new owners will adjust the higher interest rates into their calculations. Keep in mind that for most of my career, a 10 percent interest rate was not uncommon in commercial real estate. It wasn’t until the last 10 or 15 years that we had artificially low interest rates.

I believe the biggest wildcards in all this is going to be jobs. If the recession deepens, with more job losses (especially in service jobs and office jobs), the major users in the cities are not going to need to gobble up any more space. That would continue the downward pressure in the market, if that happens.

This is especially true in Washington, D.C., where the government makes up 30 to 40 percent of the office user base. If the government is not taking up space there and they’re not requiring government workers to come back to work, that might be a market with never-before-seen vacancy rates and where there are few demand drivers outside of technology.

In some cities where the technology is significantly stronger (New York, Chicago and San Francisco), eventually, tech companies will snap up office at a certain point. The technology companies are similar to a private family office — with indefinite hold periods — especially because some of these tech companies plan on being around for a long time. All of a sudden, it’s going to look relatively inexpensive to get into these spaces.