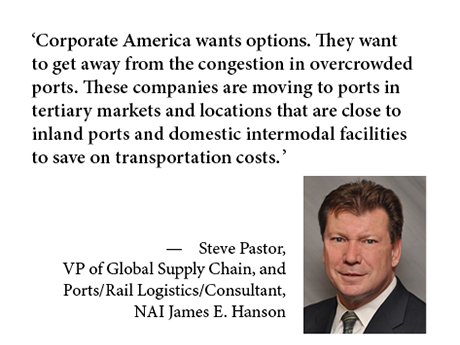 Amazon recently reconfigured and consolidated its network of warehouses, and many other retailers followed suit. The result? The outlook for industrial real estate, particularly retail warehouses, is now more difficult to interpret.

Many retail clients are repositioning their supply chains to help avoid slowdowns and a potential International Warehouse Logistics Association (IWLA) union strike on the West Coast. This change has merged with a corporate need to find additional options for shipping and transport (especially as prices for transportation and industrial rents rise).

The demand for industrial space has increased rapidly in less “congested” areas. As economic uncertainty continues, there is a shift towards tertiary markets for industrial real estate. This change provides significant opportunities for industrial investors, says Steve Pastor, VP of global supply chain, and ports/rail logistics/consultant at NAI James E. Hanson, who serves as NAI Global Industrial Council Chair. Investors and developers may be able to take advantage of a pause in a highly competitive field, in tertiary markets that have been traditionally less expensive than major and core markets.

News of Amazon’s plans to scale back its acquisition of industrial space (and to sublease its existing property to other retailers) has given some users opportunities to acquire warehouse space now. This intermission is a relief to non-Amazon businesses unable to compete for space with the world’s largest online retailer.

Amazon walked away from about 100 build-to-suit spaces, losing deposit money in the process, says Pastor. At the same time, the company is giving up approximately 30 million square feet of industrial space and subleasing space in other facilities to other retailers and warehouse users.

Amazon’s dominance of the industrial market created constraints for its competitors — constraints that may be less pressing now. Pastor says that at one point, Amazon was purchasing close to a third of the steel in the United States to build warehouses. Other materials — everything from roofing supplies to concrete — were in red-hot demand from Amazon (and their competitor Walmart). Amazon and Walmart have been leading purchasers of domestic chassis and domestic container boxes since January 2022.

With the delivery time for steel currently at 35 to 50 weeks and the delivery time for commonly used nuts and bolts (that tie warehouse roofs and buildings together) at 45 to 55 weeks, Pastor says this cooling climate is an overall positive for his clients, who were often unable to obtain materials due to ongoing supply chain issues and high competition. “I’m telling clients and developers: get what you can now, because once Amazon figures out their shipping and supply approach, the situation could become heated again. No one knows what Amazon’s model is going to look like coming back out of the gate or the impact they might have on the supply chain in the near future.”

In a recent earnings call, Amazon CEO Brian Olsavsky’s stated that he expects Amazon’s technology infrastructure will represent slightly more than half of the company’s total capital investment in 2022.

He also believes that ongoing supply issues, which may not be resolved for years to come, may encourage companies to return their product manufacturing to the United States, in spite of the increased cost. The threat of delays is too great to have all of a corporation’s proverbial eggs in one basket overseas again, according to Pastor.

The Future of Industrial is Tied to Shipping

In the near future, potential disruptions still abound. Currently, there is the threat of a strike from labor unions involved with Port of Los Angeles, the Port of Long Beach and 27 other ports along the West Coast. This negotiation (with workers involved with docks, warehouses, railroads and more) has the potential to cripple the system that already has backed-up containers at these high-traffic ports. Contracts for the Pacific Maritime Association and the International Longshore and Warehouse Union expired in July, although normal operations continue for the time being and the reality of a strike occurring remains uncertain.

A shortage of truckers (due to labor shortages, drug and alcohol compliance laws and electronic logging devices that limit the time truckers can stay on the road) plus increased gas prices means that the cost of shipping goods has increased dramatically. Reducing transportation costs is the number one priority for corporations, says Pastor.

“Corporate America wants options” when it comes to supply chain, warehousing, transportation and ports, explains Pastor. “They want to get away from the congestion in overcrowded ports. These companies are moving to ports in tertiary markets and locations that are close to inland ports and domestic intermodal facilities to save on transportation costs.”

Tertiary gulf ports and East Coast port markets form one part of the effort to spread out port activity, with Savannah, Charleston, Mobile, Philadelphia, Baltimore, the Virginia port and New York and New Jersey ports all enjoying brisk trade, rising industrial rents and low vacancy rates as manufacturers seek to develop alternative routes and build cost-effective facilities near rail, low-cost utilities and access to affordable labor. In terms of the ability to grow further, Pastor points to the Southeast and Southwest as the only real opportunities for expansion.

The wish list for these facilities — in order to save on the cost of logistics — is a fairly simple formula, says Pastor. You must be near rail and “you must be near a port or an inland port or a domestic intermodal facility to reap those savings.”

“I think the future is going to rely on rail-to-truck facilities and truck-to-rail facilities, where that’s an option. The more facilities where you see that approach in the future, the more benefit for everyone — the consumer, the railroad, the shipping company. There is a clear methodology that clients want to achieve to shorten their length of haul. I think it’s a win-win.”