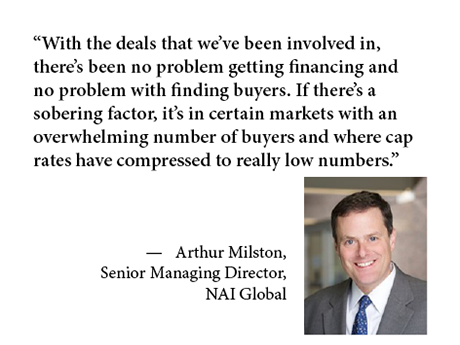 The multifamily investment sales sector had well-documented success in 2021 with a record volume of over $220 billion in transaction activity. Factors driving competition for transactions within the sector included: increasing home prices, widespread interest in renting and the easing of COVID-19 restrictions bringing renters back into the nation’s cities, all of which drove the average, nationwide multifamily occupancy rate above 97 percent.

With firmly rooted fundamentals, investor interest across the spectrum of multifamily has been intense. Traditionally popular core investment products (stabilized and value-add assets located in primary and secondary markets) were the clear winners with investors. Some multifamily REIT stocks increased by 75 to 100 percent in 2021, explains Arthur Milston, senior managing director with NAI Global and co-head of the company’s Capital Markets Group.

Milston sat down with REBusinessOnline to explain where NAI Global sees growth and opportunities in 2022.

REBusiness: Who are the primary investor groups acquiring multifamily? What types/locations are they attracted to?

Milston: Historically, multifamily has always had very fragmented ownership compared to other asset classes. Currently, the dominant players are the large aggregators of product, whether it be REITs or institutional investors that are buying, typically in conjunction with an operating partner. Pension funds and advisors, large institutions and other programmatic joint ventures between institutional owners and operators have been the most active over the past decade.

But in terms of actual activity and number of deals, the list expands, and every sector of capital seems interested in participating, including private investors, syndicators and local market participants.

REBusiness: What’s the appetite from lenders, and who are the primary lenders for multifamily?

Milston: Freddie Mac and Fannie Mae — the two government sponsored enterprises (GSEs) — are still the most likely sources for financing the properties that fit their criteria. There are certain thresholds that must be met: the property typically needs to be above 90 percent occupancy, and there are requirements in terms of vintage and sponsorship. However, GSEs are still the most common and effective lender from a rate and term standpoint.

After GSEs, banks — especially large commercial banks — have stepped onto the field again and are lending. There is also a tremendous amount of activity from alternative financing sources that are out there lending.

Among the most active alternate sources are debt funds. These tend to be more competitive on value-add deals. For example, if you’re below the 90 percent occupancy threshold, and you have a value-add deal or perhaps a lease-up play, you’ll finance that with shorter-term debt. This could be a two-to-three-year floater program before putting in the long-term, permanent financing.

This type of transaction would likely be done through a debt fund or bank, as opposed to going to the GSEs. But this market is incredibly robust as well, which is one of the underlying fundamentals driving investor demand and pricing to the levels that we’ve seen.

When you can finance something [with an interest rate] in the high 2s to low 3s, you can afford to pay a cap rate that is in the low 4 to 4.5 percent range for that product. In some markets, it’s even more heated than that, which is a large factor (along with all the anticipated rental growth that’s being underwritten today). This competition is what we anticipate going forward as we continue to see huge demand and hopefully get further away from the pandemic.

REBusiness: What impact are GSEs having and what limits are they imposing? Are there going to be any changes ahead for financing multifamily assets?

Milston: As of right now, I don’t think that the impact has been dramatic because GSEs are still lending, and there’s no vacuum left behind or unavailability of debt. There are also many other sources of debt out there that are willing to lend. This includes groups that historically have been more equity providers that have been willing to come into the space in a debt position with or without some equity component built into the deal.

I’m not sure that you’re going to see any dramatic changes. In the near term, obviously, the biggest thing that’s on everybody’s minds is the broader economy: inflation is clearly a huge issue, and most market participants expect that the Fed will increase rates three or four times in 2022. That will probably come sooner rather than later, based on what the Fed has said.

That outcome certainly has potential for moderating pricing to some extent, but I don’t think it’s going to in any way affect overall investor interest and transaction volume. Rising interest rates will be partially mitigated by inflation and the ability to underwrite higher rent growth in the future.

Historically, the real estate capital markets have been very good at underwriting around whatever issues there are and being more aggressive to get deals done.

REBusiness: Do you expect difficulty with finding financing? What about in the future?

Milston: With the deals that we’ve been involved in, there’s been no problem getting financing and no problem with finding buyers. If there’s a sobering factor, it’s in certain markets with an overwhelming number of buyers and where cap rates have compressed to really low numbers. That’s where we’ve started to see fewer confidentiality agreements signed, fewer tours and fewer offers.

But this is a shift on a relative scale: where we would have perhaps 30 or 40 offers previously, there are still 20 offers. It’s a big difference, but it has not impacted the ability to get deals done or to reach pricing expectations (or even blow through them).

That could change over the next year. I would expect that by early 2023 we will probably see the market cool off somewhat because of the pandemic, supply chain issues and inflationary pressures. A lot of the development pipeline has slowed down. These factors have not really had a big impact on occupancies and market fundamentals yet. However, I expect that they will at some point.

There’s a tremendous number of permits and applications that are out there. From a supply and demand standpoint, those things do point to softening in the market in the future, but I wouldn’t expect to see that in 2022.

REBusiness: In terms of geographical areas, do you see people going to smaller markets looking for properties for bigger yields?

Milston: Absolutely. From an institutional standpoint, for major markets, you still want to be in a top 30 to 50 MSA. Some of the largest institutional equity investors still won’t stray too far out of that geographic limitation. But for everybody else who is looking at product across the quality spectrum, they are looking in secondary markets that fall outside the top 50 MSAs.

The top five markets in transaction volume in 2021 were Atlanta, Phoenix, Los Angeles, Denver and Washington, D.C., and just outside of that were New York, Seattle, Orlando, Tampa and San Diego. Those markets make up the Top 10.

But as you move past the more well-known and likely markets (Dallas, Raleigh, Miami, etc.), you start to see some markets that historically haven’t had much volume but now have a significant amount of transactions. These include markets like Detroit, Savannah, Memphis, Birmingham and Minneapolis. There are also active areas like Norfolk, Virginia, which is proximate to a very large market, but is not, in and of itself, a huge market.

Smaller areas like Colorado Springs and Fort Collins have been incredibly active as well because of the tremendous amount of people moving to Colorado and the job creation there.

What we’ve seen in our offices at NAI is a high amount of interest in not only finished product but in land for new development. Job formation, growth and population shifts are driving a lot of this interest.

Multifamily is gathering the most interest in the Sunbelt states and high-growth states. These are often not huge volume markets in terms of total asset value, but they’ve seen a turnover of 10 to 15 percent of their total asset base in 2021. Investors have to go where they can be competitive and get a better yield.

REBusiness: What’s the outlook for 2022 for multifamily? Where do you see growth opportunities?

Milston: The market remains incredibly competitive and pricey, with buyers continuing to stretch themselves to win deals. We’ve seen hard money on contract executions, accelerated due diligence processes and buyers willing to incur the costs of closing transactions including the defeasance of existing debt. Investors will do many things to go above and beyond in an effort to win deals.

From the standpoint of inflation and the economy, I don’t think we are likely to see much change in this arrangement — certainly not in the first half of the year. I doubt there are going to be large decisions made at the federal level on anything until after the midterm elections. This is, of course, unless there is some unfortunate, unforeseen event or a new strain of COVID with a much higher death rate.

Because I think it’s likely we’ll continue to see a very competitive market, I think we’ll continue to see people pushing further out into top 100 MSAs and beyond to chase yield. I think you’re going to continue to see the moves largely based on demographic trends, job creation and household formation. These markets are likely in places like Colorado and Tennessee with high population growth or in certain areas where you’re seeing lots of other industrial activity and jobs that follow along with that activity.

We will start to see more multifamily product come on-line at the end of 2022 and beginning of 2023. However, I don’t think we will see a huge amount until the middle of 2023 and beyond, where there could be an impact/cool down in the market. Maybe at that point the market will moderate and won’t keep growing as significantly as it has over the past year.

But since we were at a record volume in 2021, if we do nothing but stay the course in 2022 it will still result in a historically huge amount of transaction activity and continued interest in the market.