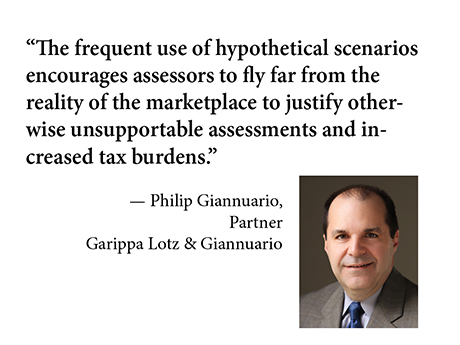 Our tax courts live in a hypothetical world where they review property tax assessments in a theoretical manner to mimic the actual marketplace. Municipal officials often use this paradigm to distort concepts and achieve high values that cannot be realized in the market. The case of CIBA Specialty Chemical Corp. vs. Township of Toms River highlighted this dichotomy.

The subject property was an industrially zoned, 1,211-acre former chemical plant in Toms River, New Jersey. The plant produced industrial dyes and resins for over 40 years. Unfortunately, the manufacturing process also created significant industrial waste that was treated and disposed of onsite, significantly contaminating the soil and groundwater.

The level of environmental contamination was so severe and pervasive that the entire property was designated a Superfund Site and was placed on the U.S. Environmental Protection Agency’s (USEPA) National Priorities List in 1983.

Commercial operations at the site ceased in 1996, but environmental remediation work has been both active and ongoing. The nature and extent of the contamination has embroiled the property and the township in public controversy, federal criminal prosecution and a number of civil lawsuits initiated by both public entities and private citizens.

Further complicating matters, the subject property is in a protected coastal zone adjacent to a tributary known as Toms River. This added layer of government oversight by the New Jersey Department of Environmental Protection serves to safeguard sensitive coastal areas and endangered species from overdevelopment. When put into practice at the subject property, these regulations either completely prohibit or severely restrict redevelopment activity on most of the property.

Any redevelopment activity proposed at the site would require the
prospective developer to navigate this labyrinth of federal and state regulations, obtain consent and cooperation from a number of federal and state agencies and garner support from the local municipality and public interest groups to avoid politicization of the zoning and planning processes at all levels.

Undaunted by these regulatory restrictions, the town asserted that not only could the property be developed, but that numerous residential housing units could also be constructed on the site despite the current zoning or the pervasive contamination. And of course, the town sought to tax the property on its potential residential value.

It was undisputed that the USEPA was the primary regulatory authority from whom a market participant would have had to obtain approval before attempting to redevelop any part of the site. The town expert conceded this fact. The USEPA has total control over the property while remediation is taking place and will reject any proposal it believes may interfere with selected remedial action — or that would lack public support.

Despite overwhelming evidence that USEPA regulations would prohibit any development, that the zoning didn’t allow residential construction and that the public opposed the site’s redevelopment, the town was undeterred. Its leaders argued that high-density housing could have been developed on the property with a rezoning, justifying its revaluation as residential rather than industrial real estate.

The frequent use of hypothetical scenarios encourages assessors to fly far from the reality of the marketplace to justify otherwise unsupportable assessments and increased tax burdens. Finding comfort in this hypothetical world, the town appealed to the perceived taxing authority bias of the New Jersey Tax Court.

To create their hypothetical world in court, the town redefined key words in the USEPA regulations to establish results that were completely inappropriate for a rational reading of the rules. They stretched logic and applied to the subject property actions that USEPA had taken at other Superfund Sites. In doing so, they assumed that all contaminated sites could be treated the same, and that the case workers at this site will make decisions based on events at other remote Superfund Sites, rather than basing decisions on the facts related to the subject property.

The town contrived its self-serving arguments to satisfy an outrageous assessment. It is all too often that the hypothetical nature of the court’s standards and the theatrical nature of appraisal theory invite the clear distortion of marketplace reality.

The only saving grace in the system is that the courts assigned to decide these cases are trusted to end the nonsense and craft decisions based on fact and actual dealings. That does not always happen, but here, it did. In a detailed and thorough decision, the court summarized the overwhelming data that proved the taxpayer’s case.

The court concluded that the entirety of 1,211 acres was development-prohibited, due to its status as an active Superfund Site and USEPA’s ongoing institutional controls. The USEPA’s oversite documents, which are legally enforceable and filed with the county clerk, restrict any development at the property unless the USEPA approves, or the site is partially or fully de-listed as a Superfund Site.

Reality finally hit home for the municipality when it was compelled to refund the taxpayers over $18 million.

These types of rulings in taxpayers’ favor are rare. Nonetheless, taxpayers must continue to press courts to recognize market reality. It is not the courts’ job to protect the municipal tax base.