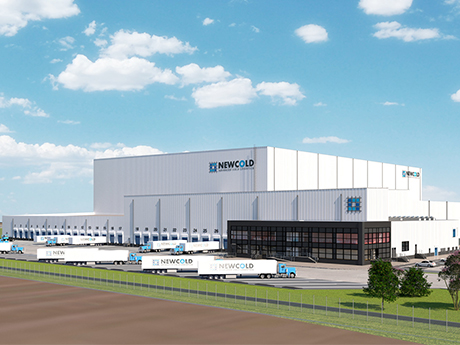 Pictured is a rendering of a NewCold facility underway in Lebanon, Ind. The newly announced NewCold project will be situated within Midland Industrial Park in McDonough, Ga.

MCDONOUGH, GA. — Global cold storage developer and owner NewCold has released plans for a $333 million facility in McDonough, a southern Atlanta suburb in Henry County. The developer says the project will create 170 new jobs upon completion. No construction timeline was disclosed.

NewCold’s automated storage and distribution facility will be situated within Midland Industrial Park, which sits about one mile from the I-75 and Ga. Highway 155 interchange.

Project manager Cameron Barnhill represented the Georgia Department of Economic Development’s Global Commerce team on the NewCold project in partnership with the Henry County Development Authority, the Georgia Department of Transportation, Georgia Quick Start, Norfolk Southern and Georgia Power. NewCold’s investment represents the largest single investment in the history of Henry County, according to Carlotta Harrell, chair of the Henry County Board of Commissioners.

Georgia is a prominent hub for food logistics companies. The state currently has more than 189 million cubic square feet of cold storage space, according to the governor’s office.

Founded in the Netherlands and with a North American base in Chicago, NewCold is a rapidly growing “cold chain logistics” company. NewCold currently owns and operates 13 facilities in nine countries on three continents, including U.S. facilities in Washington, Idaho and Indiana. The firm employs 1,200 staffers and offers more than 1 million pallet positions to some of the largest food companies in the world.