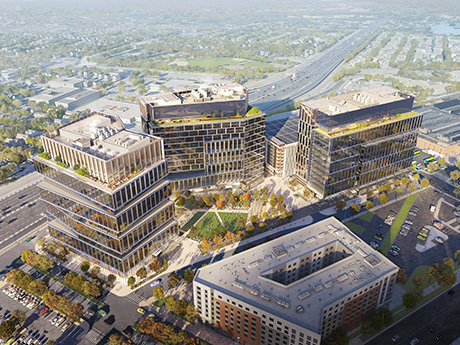 Phase I of Assembly Innovation Park in Somerville, Mass., will comprise a 12-story life sciences tower. The three-building campus will also feature a cafe, conference center and a food hall. (Rendering courtesy of Perkins&Will)

SOMERVILLE, MASS. — Newmark has arranged $514 million in construction financing for Phase I of Assembly Innovation Park, a life sciences tower spanning 485,000 square feet in the Boston suburb of Somerville. BioMed Realty, a San Diego-based subsidiary of Blackstone that focuses on life sciences real estate, is developing the 12-story tower and accompanying parking garage.

The tower will be situated at the intersection of Middlesex Avenue and Foley Street, with visibility along I-93. According to the property website, Phase I of Assembly Innovation Park will feature an even split between office and laboratory space. Future phases of the three-building campus will include a cafe, conference center and a food hall.

Phase I of Assembly Innovation Park will incorporate tech-enabled sustainable features, including a high-performance curtain wall, high-efficiency chilled water and exhaust air systems and a rooftop photovoltaic array. BioMed Realty is aiming to achieve LEED Gold and WELL certifications at the property.

The San Diego-based life sciences developer broke ground on the project in January 2022 and expects to deliver the property in the second quarter of 2024. No tenant commitments have been announced at this time.

The loan is part of more than $4 billion in recent and active life sciences transactions by Newmark’s Boston Debt & Structured Finance group. The team also secured $404 million in financing on behalf of BioMed Realty for its 601 Congress life sciences conversion project in Boston’s Seaport District.

“Life sciences has been a major driver of financing activity across greater Boston in the past 18 months,” says Douvadjian Sr. “Projects like Phase I at Assembly Innovation Park will enable the region to continue serving as one of the world’s most desirable destinations for cutting-edge laboratory, research and biotechnology firms.”

BioMed Realty owns and operates Class A life sciences real estate comprising 14.9 million square feet in markets throughout the United States and the UK as of March 31. The company’s holdings are situated in markets such as Boston/Cambridge, San Francisco, San Diego, Seattle, Boulder and Cambridge, UK.