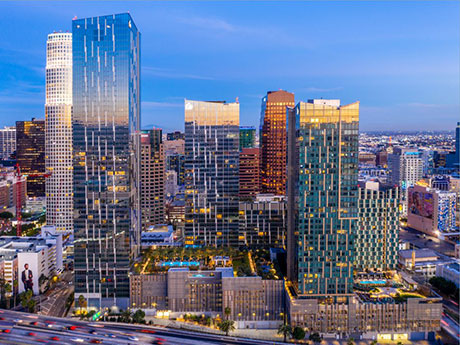 THEA at Metropolis rises 59 stories with 685 units. The property includes the tall building on the left as well as a 1.5-acre podium amenity deck.

LOS ANGELES — Northland has entered the California market with the acquisition of THEA at Metropolis, a 59-story luxury apartment tower in downtown Los Angeles. The U.S. subsidiary of China’s Greenland Holding Group sold the asset for $504 million, according to The Wall Street Journal.

Northland says the purchase price represents a 40 to 45 percent discount to today’s replacement costs. The newspaper reports that the original asking price 18 months ago was $695 million, which was still less than the original development costs. High interest rates and falling rents have affected the apartment market nationally. Additionally, The Wall Street Journal cites California rent regulations and the ability of renters to move away from downtown Los Angeles due to remote work for contributing to suppressed property values.

THEA was designed and built as for-sale condominiums before being converted into apartment units after construction. Completed in 2020, the 685-unit property is currently 91 percent occupied.

“In THEA, Northland secured an extraordinary opportunity to acquire the highest quality luxury apartment tower in the United States at a steeply discounted price,” says Matthew Gottesdiener, Northland’s CEO. “Northland believes fervently in the enduring appeal of California and a vibrant future for Los Angeles, and we are encouraged to find these are contrarian opinions well compensated in the market today.”

Newton, Massachusetts-based Northland financed the acquisition with 10-year, fixed-rate debt. The majority of the equity invested in THEA came from Northland’s disposition of Hilands, an 826-unit property in Tucson, Arizona that the firm acquired for $21 million in two purchases in 1992 and 1997 and sold earlier this year for $178 million.

Northland owns and operates a multifamily portfolio that includes more than 26,000 units throughout 16 states and a $3 billion development pipeline with land sites in Boston, Atlanta, Orlando, Denver and Richmond. The private equity firm maintains $8 billion of assets under management.