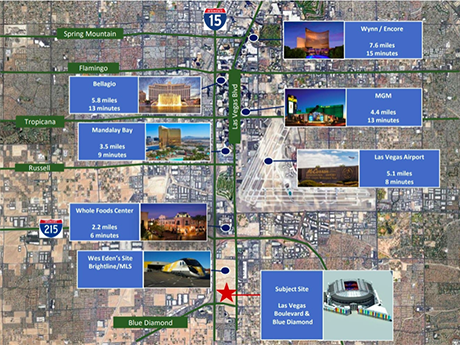 The $3 billion entertainment district by Oak View Group will be located south of the Las Vegas Strip at the intersection of highways I-15 and I-215.

The project will be located at the intersection of Interstates 15 and 215, and is set to include an 850,000-square-foot arena, casino, hotel and an additional entertainment venue. The arena will host upwards of 20,000 seats and will offer amenities such as suites and premium hospitality clubs.

Oak View Group is actively seeking a partner to operate the hotel and casino portion of the development, and has held talks with a number of potential participants, according to reports by Bloomberg. The arena portion does not yet have a tenant.

“We are proud Oak View Group has chosen Nevada for its next and largest project,” says Nevada Governor Steve Sisolak. “This newly proposed entertainment district in Las Vegas will help continue the state’s economic momentum and create thousands of jobs and greater prosperity for Nevadans.”

Groundbreaking on the project, which is designed by architecture firms Gensler and Populous, is scheduled for 2023. Marc Badain, former president of the NFL’s Las Vegas Raiders, will also partner with Oak View Group on the development.

“South of the Las Vegas strip represents one of the few areas of potential future growth of the gaming and entertainment corridor,” says Tim Leiweke, CEO of Oak View Group. “This project is an industry game-changer and we will usher in the evolution of Las Vegas as the new entertainment and sports capital of the world.” Oak View Group’s Las Vegas project will be its latest large-scale arena development. The company recently opened the $1.1 billion UBS Arena (pictured), which is home to the New York Islanders in Elmont.

The development is the latest large-scale arena project by Oak View Group, which recently opened a $1.2 billion arena for Seattle’s NHL team, the Seattle Kraken, and a $1.1 billion arena for the New York Islanders in Elmont. Construction is also currently underway on arenas by the company in Austin, Texas; Coachella Valley, Calif.; and Baltimore.