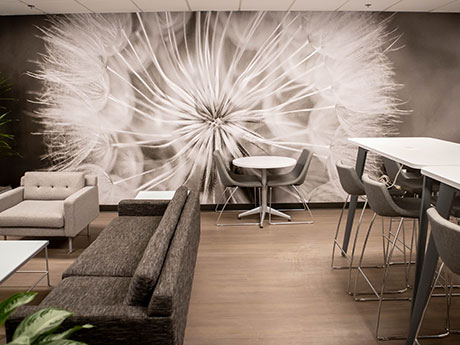 This modernized tenant suite can be found at 750 Stephenson Highway in Troy.

The tumultuous events of the last two years have brought uncertainty into many aspects of Detroit’s office market. Even as companies emphasize their eagerness to return to the office, many questions remain regarding space designs, required square footage and buildout requirements.

With increasing vacancy rates and negative net absorption throughout the metro Detroit office market, real estate experts are witnessing tenants becoming more selective in property occupancy. The result has been a slowing demand for Class B and C office product.

Tenants have begun targeting Class A assets with improved visibility, signage, modernized color schemes, numerous amenities and flexible floorplan designs. As the need for larger office footprints goes down in reaction to post-COVID considerations, tenants have become willing to pay increased per-square-foot rents, for at or below preexisting rental budgets, due to decreased size requirements.

The need for tenants to target Class A facilities has been compounded by the so-called “Great Resignation,” as employees are willing to demand more from their employers. As a result, employers know that a failure to invest in a more modern and amenitized workspace may result in poor employee retention and future talent recruitment.

Additionally, landlords are needing to offer greater levels of concessions to their tenants in order to execute new leases, as well as renewals. These concessions are primarily coming in the form of free rent periods and increased tenant improvement dollars, even as construction and buildout costs remain high.

With the changing office environment, each company is in the midst of writing and rewriting their return-to-office (RTO) strategies. Solutions range from full back-to-office policies to continued work-from-home agreements. Deloitte recently confirmed that it was downsizing its office footprint, moving out of its 102,000-square-foot space in the Renaissance Center and into a smaller 35,000-square-foot WeWork location. General Motors has opted for a ‘work appropriately’ culture, in which its employees have been given the opportunity to work wherever they feel best suited to complete their work obligations.

In contrast, Ford Motor Co. has doubled down on its physical workspace needs with its investment in the Corktown Campus, a 30-acre mixed-use space centered around the redevelopment of the historic Michigan Central Station. The campus will house the company’s autonomous vehicle division and bolster an increased footprint from partner companies and suppliers. While construction on the campus was slowed by the pandemic and continuing disruptions in the supply chain, parts of the campus are expected to come online in late 2022.

Furthermore, as each company continues to navigate its needs for office space, the number of subleases is up, especially among tenants who signed long-term leases prior to the pandemic and/or those who previously relied on densely packed office environments such as call centers, customer service and IT support. With decreased footprint requirements, the days of dense cubicle farms are likely over.

While metro Detroit’s first-quarter vacancy rate of 13 percent and net absorption of -193,000 square feet might paint a gloomy picture of the office market, especially in the central business district (CBD), it is important to remember that these trends are not isolated to Detroit. In fact, metro Detroit’s 13 percent vacancy rate is dwarfed by those of Indianapolis (18.5 percent) and Chicago (20.6 percent).

Additionally, massive construction projects in the CBD show a strong commitment on behalf of owners and developers to maintain a substantial footprint in Detroit. Expected in late 2022, one of the market’s largest projects is the 20-story office tower at 2025 Woodward Ave., which will serve as the commercial banking headquarters for Huntington Bank. The headquarters will employ 800 people, made possible by Huntington’s 2021 merger with TCF Bank.

Just down the road from the Huntington Bank building is the Hudson’s Site, a 1.5 million-square-foot mixed-use development being built on the site of the J.L. Hudson flagship department store. Expected to be completed by summer 2024, the asset will include over 400,000 square feet of office space.

While uncertainty during the past two years may have slowed transaction velocity, deal volume has begun to rebound. Tenants with expiring leases in the CBD have moved their operations to the suburbs. This allows for both increased amenity-proximity, walkability and decreased drive time. RTO plans are placing a premium on a short commute in response to inflation and higher gas prices.

The market’s largest newly executed leases have been for tenants occupying space in the suburbs. For example, Signarama (41,000 square feet) and Capital Home Mortgage (11,000 square feet) have both signed leases establishing strong footprints in Troy, while automotive mapping designer Ushr signed a lease for 23,000 square feet in Livonia.

The future of Detroit office

While the past two years have transformed the office market, the future offers tenants and landlords a great amount of flexibility and ability to innovate. Those who offer increased amenities, modernized floor plans and foster a healthy work-life balance will continue to garner market traction. The future is bright for properties that can offer collaborative space in which tenants are able to occupy smaller footprints, and it will be exciting to see what current construction and future market activity holds for the city of Detroit and its surrounding suburbs.

Ryan Nierman, Ph.D. is a senior financial analyst and Bradley Meloche is a financial analyst, both with Colliers Detroit. This article originally appeared in the July 2022 issue of Heartland Real Estate Business magazine.