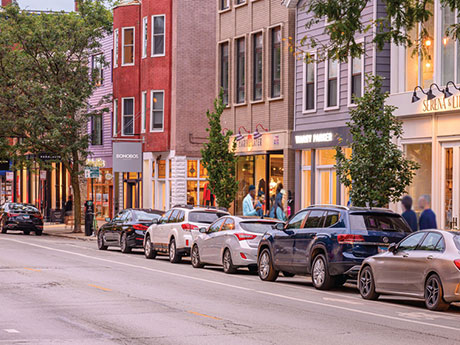 Digitally native brands such as Warby Parker continue to be active in Chicago’s urban neighborhoods. (Photo courtesy of Acadia Realty)

As the summer season begins, retailers and restaurateurs in Chicago are scheduling tours for the city’s warmest months of the year, and overall leasing velocity is continuing to increase.

I grew up at Fremont & Armitage in Chicago’s Lincoln Park neighborhood through my high school years.

I’ve experienced the rise and fall of many retailers, the emergence of digitally native brands, the major shift in how and where we shop and the influence of social media in the retail industry.

As a consumer and a retail advisor, I believe in digitally native brands that recognize the importance of omnichannel retail. Traditional brick-and-mortar and e-commerce are stronger together.

Coming out of the pandemic, the most active soft goods retailers in Chicago’s urban neighborhoods continue to be digitally native brands that utilize omnichannel sales strategies, such as Framebridge. The Washington, D.C.-based custom framing service opened its first Chicago location in the West Loop/Fulton Market District, followed by River North and Lakeview’s Southport Corridor.

Across the globe and in Chicago’s Gold Coast and North Michigan Avenue trade areas, demand for new and secondhand luxury goods is soaring. This past winter, despite freezing temperatures, there were lines outside of Chanel in the Gold Coast and Louis Vuitton and Gucci along North Michigan Avenue. Luxury sales are strong and are attracting other luxury brands to the market, like Goyard, The Real Real and Brietling.

On Oak Street in the Gold Coast, Parisian luxury brand Goyard will be opening a 5,000-square-foot flagship store in the former Pomellato building. On the 900 block of Michigan Avenue, San Francisco-based luxury consignment shop The Real Real opened a 12,000-square-foot flagship and Swiss watchmaker Brietling opened in a jewel box space at the base of the Palmolive Building.

Golf-entertainment concepts explode on the scene.

The entertainment/golf-entertainment industry came to a halt during the pandemic but has re-engaged in expansion, both in new construction and long vacant spaces. In the West Loop/Fulton Market, Drive Shack’s Puttery mini golf concept will be opening a 23,000-square-foot, two-level flagship in a new development.

In May, Five Iron Golf opened a 13,150-square-foot location in a former Erehwon space vacant since 2016, joining its 11,000-square-foot location at Block 37 in the Loop that opened in January. In Lakeview/Wrigleyville, franchise-based X Golf is currently under construction as it continues its search for a South Loop location. London-based Swingers is also actively looking for a Chicago flagship.

While the food and beverage industry faced incredibly challenging circumstances resulting from the pandemic, it rebounded rather quickly. Local restauranters have continued to expand, even opening multiple concepts steps away from one another.

For example, along Randolph’s Restaurant Row in the West Loop/Fulton Market, DineAmic Hospitality opened Bandit, a retro bar across the street from two of its long-established concepts, Bar Siena and BomboBar. DineAmic has since expanded Bandit to incorporate “Bandit on 2,” to accommodate larger parties. In January, the company opened a lively Greek restaurant called Lyra on Fulton, its fourth concept in the neighborhood.

In the same project as Bandit, Hogsalt Hospitality, best known for its Au Cheval burger, opened upscale Trivoli Tavern. Anchoring Gin Alley, this is Hogsalt’s fourth concept to call the cobblestone courtyard home. Coming is an expansion of Trivoli Tavern into the former RM Champagne Salon also within the project, featuring a lower-level jazz club.

National restauranters are investing as well. Gordan Ramsay signed a lease for an 18,000-square-foot, single-tenant building in River North, which will be welcomed by his newly opened burger concept three blocks away. He also plans to secure a location for Fish & Chips in the East Loop near Millennium Park. Another example is José Andrés’ Think Food Group, which opened Jaleo in River North, and Bar Maar and Bazaar Meats in the nearby Loop.

Expect a hot summer for retail real estate in Chicago.