Over 90 Percent of Construction Firms Are Struggling to Find Workers, New Survey Shows 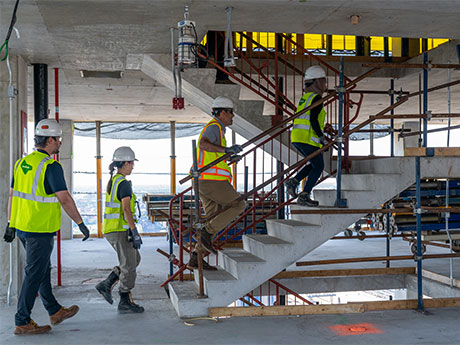 Developed and constructed by Lendlease, The Reed at Southbank in Chicago is expected to be completed in the summer of 2023. Construction companies are facing many challenges, including supply chain interruptions, cost of materials and workforce shortages.

Construction firms are eager to hire more employees, but a dearth of qualified workers has stymied their efforts, according to an annual workforce survey conducted by the Associated General Contractors of America (AGC) in conjunction with Autodesk. Among firms with job openings, 91 percent report they are having a hard time filling some or all positions.

A total of 1,266 individuals from a broad range of construction firm types and sizes participated in the workforce survey conducted in July and August.

Some 77 percent of contractors report there are few workers available who meet the minimum qualification standards, including being able to pass a drug test, which is something insurance companies require for all workers in the industry.

With the unemployment rate in the construction industry hovering around 4 percent, finding qualified applicants is sure to remain a challenge in the near term, says Ken Simonson, AGC’s chief economist.

August Hiring By the Numbers

The U.S. construction industry added 16,000 jobs in August compared with the prior month and 311,000 jobs yearly, an increase of 4.2 percent, according to an analysis of federal employment data by AGC. Total construction employment climbed to 7.7 million in August.

Nonresidential firms added 4,300 employees in August, as gains of 700 jobs at general building contractors and 5,600 at nonresidential specialty trade contractors offset a loss of 2,000 workers at heavy and civil engineering construction firms.

The survey not only pinpointed some of the industry’s biggest obstacles, but it also highlighted what steps general contractors are taking to address the problems. Among the key highlights: