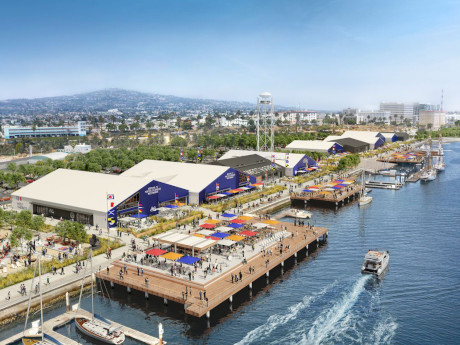 Located in Los Angeles’ San Pedro neighborhood, West Harbor will feature more than 125,460 square feet of retail and restaurant space, as well as a proposed 6,200-seat amphitheater. (Rendering courtesy of Studio One Eleven)

LOS ANGELES — Parkview Financial has provided a $35 million senior construction loan to a venture between Ratkovich Co. and Jerico Development for the development of West Harbor, a retail center along the Los Angeles waterfront in the San Pedro neighborhood. The financing from Parkview is in addition to $55 million of Commercial Property Assessed Clean Energy financing, as well as $85 million of investor equity.

Situated on 42 acres at 1200 Nagoya Way, West Harbor will feature more than 125,460 square feet of multi-tenant retail space. Slated for completion in two phases, several restaurants will anchor the development, including Yamashiro, King & Queen Cantina, a market hall for fast-casual dining and Bark Social. Additionally, the project will include a 6,200-seat amphitheater developed in conjunction with the Nederlander Organization, as well as a variety of other tenants.

The Los Angeles City Harbor Department owns the site and executed a long-term ground lease with the developer. The project is now under construction with completion slated for 2024.