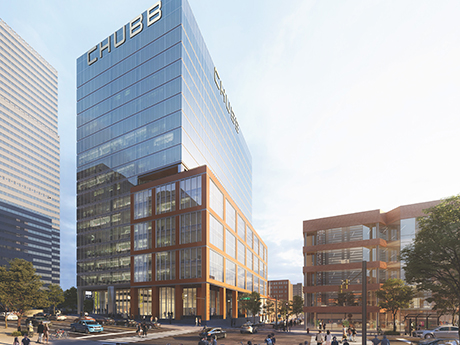 In addition to consolidating its existing Philadelphia offices to the new building at 2000 Arch St., Chubb plans to hire another 1,200 or so people within a few years of the new office opening.

PHILADELPHIA — Parkway Corp. has announced plans for a 438,000-square-foot office building at 2000 Arch St. in Philadelphia’s Center City district. The locally based developer has also received a commitment from insurance giant Chubb to serve as the anchor tenant of the 18-story building.

With an anchor tenant in place, construction is now scheduled to begin in the first quarter of next year for completion in the second quarter of 2026. Chubb expects to place approximately 3,000 employees at the new building within three to five years of opening, with about 1,200 of those positions representing newly created jobs.

The new office will be the largest in the country for the New Jersey-based insurance giant, which currently employs about 2,000 people throughout Pennsylvania. In addition, Chubb insures approximately $500 billion in property in Pennsylvania, including $70 billion in Philadelphia, that large users in the healthcare, manufacturing, financial services and media industries occupy.

Chubb also has historical ties to Philadelphia, having established its oldest subsidiary, The Insurance Co. of North America, at Independence Hall in 1792. Chubb’s current offices in Philadelphia are located at 436 and 510 Walnut St., just steps away from Independence Hall.

“Our new building will have a collaborative, flexible working environment that provides our employees access to all this city offers,” says John Lupica, vice chairman at Chubb.

The Redevelopment Assistance Capital Program (RACP), which the state is providing and the Philadelphia Industrial Development Corp. is facilitating, will provide $10 million to fund development and construction costs of the project. The development team also says that construction activities will support hundreds of local union workers.