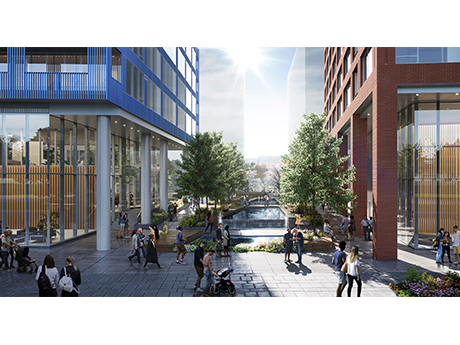 ARLINGTON, VA. — Denver-based Partners Group and Orlando-based Zom Living have plans to develop Hazel & Azure at National Landing, a 492-unit apartment community in Arlington, about five miles south of Washington, D.C. The developers secured a total of $150 million in construction financing for the project. Zom Living has also secured a $26 million bridge loan with CB&S Bank for the site’s acquisition. Construction is slated to begin in the first quarter with completion set for late 2024.

Hazel & Azure will feature two 14-story buildings, as well as 6,800 square feet of ground-floor retail space. The multifamily community will offer studios, one-, two- and three-bedroom floorplans, as well as townhomes, all ranging from 519 to 1,784 square feet.

Located at 3030 and 3130 Potomac Ave., the project will be situated less than one mile from Amazon’s HQ2 and the $1 billion Virginia Tech Innovation Campus. Hazel & Azure will also be situated close to the Metrorail system, The Pentagon and Ronald Reagan Washington National Airport, as well as parks and walking trails such as Aquatic Park and Four Mile Run Trail.

The developers have selected bKL Architecture as the design firm, and Balfour Beatty Construction as the general contractor.