Posted on May 25, 2022 by Kristin Hiller in Development, Massachusetts, Mixed-Use, Northeast, Top Stories 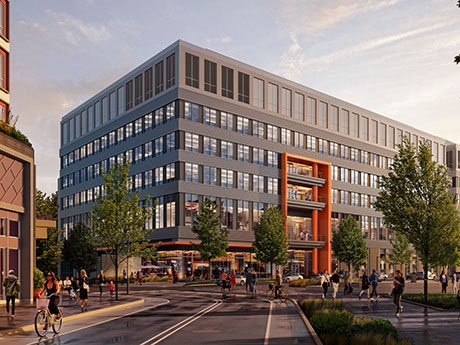 REVERE, MASS. — The HYM Investment Group, Cathexis and National Real Estate Advisors have broken ground on the redevelopment of the former racetrack site at Suffolk Downs in Revere, about five miles north of Boston. The project will ultimately span 16.2 million square feet of development, including 10,000 apartments and condominiums; 5.2 million square feet of life sciences and office space; 450,000 square feet of retail and civic space; and 40 acres of parks and open space.

The Suffolk Downs thoroughbred racetrack opened in 1935 and was shuttered in 2019. HYM purchased the property in 2017. The 161-acre redevelopment project will connect Revere to the East Boston neighborhood.

The groundbreaking marks the official launch of a joint venture partnership between HYM and National on the initial residential components of the redevelopment project. According to a news release, National’s equity participation will enable the delivery of nearly 4 million square feet of residential development (or 4,200 units) to be built at Suffolk Downs over the next eight years. The Boston Globe reports that National committed $775 million in equity financing.

The first phase of construction includes a life sciences and biomanufacturing facility as well as a residential building. Named 100 Salt Street, the life sciences building will span 280,000 square feet and will be situated adjacent to the Massachusetts Bay Transportation Authority (MBTA) Beachmont station. The building marks the first purpose-built, large-scale laboratory and biomanufacturing space in Revere, according to the development team. Designed by Elkus Manfredi Architects, the building is slated for completion by the end of 2023.

Amaya is the name of the first residential building and will include 475 apartment units. The property will feature 34,000 square feet of amenity spaces and 24,000 square feet of ground-floor retail space. Units will range from micro studios to two-bedroom floor plans. Designed by ICON Architecture, the building is slated for completion in the second quarter of 2024.

The Suffolk Downs redevelopment is projected to generate 22,000 new and permanent jobs through laboratory, manufacturing and retail, as well as more than 18,000 new construction jobs over the next two decades. The developers also plan to make significant improvements to the MBTA Blue Line and bus stations, as well as create an internal network of bike paths and walking trails.

“The groundbreaking at Suffolk Downs marks an exciting new chapter for economic development in Revere,” says Revere Mayor Brian Arrigo. “Suffolk Downs will create a new commercial cluster that connects the residents of Revere to the jobs of the future. We are thrilled to finally be an active participant in the booming life sciences ecosystem.”

Boston-based HYM is spearheading the development of more than 20 million square feet of retail estate throughout Greater Boston. Washington, D.C.-based National is an investment manager that develops, operates and manages commercial real estate projects across the United States. Cathexis, which maintains offices in Boston and Houston, is an investment firm with a national portfolio of real estate projects.