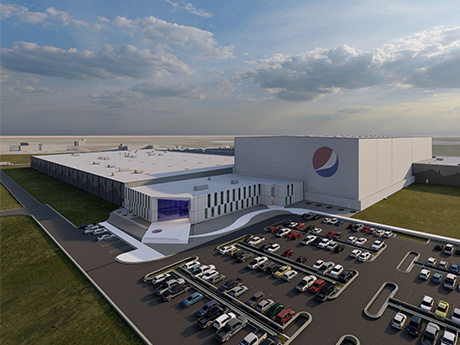 Pepsi has acquired a 152-acre plot in Denver for its new, 1.2 million-square-foot manufacturing plant. The industrial development is scheduled for completion in 2023.

DENVER — PepsiCo Beverages North America (PBNA), a subsidiary of food and beverage giant PepsiCo Inc. (NASDAQ: PEP), has acquired nearly 152 acres of land in Denver. The company plans to build a 1.2 million-square-foot manufacturing facility on the site, which will be its largest in the country.

The project will be triple the size of Pepsi’s existing facility in Denver’s River North Art District, where the company has operated since the 1950s. The new plant is scheduled to open in 2023 and will produce a variety of the company’s name-brand beverages, such as Pepsi, Pepsi Zero Sugar, Gatorade, bubly, Rockstar, Propel and Muscle Milk.

The new Pepsi plant will be the company’s most sustainable yet, according to the company, with plans for 100 percent renewable electricity, best-in-class water efficiency and reduced virgin plastic use. The initiative is part of Pepsi’s “pep+” pledge to positively impact the planet. Pepsi says the new location will also create 250 new jobs, in addition to the 250 employees already working at the downtown facility who will move to the new location upon completion.

PepsiCo generated more than $79 billion in net revenue in 2021, with a food and beverage portfolio that includes Lay’s, Doritos, Cheetos, Gatorade, Pepsi-Cola, Mountain Dew, Quaker, and SodaStream. PEP stock opened at $171.34 per share on Friday, July 15, up from $154.07 per share one year ago.