Philadelphia 76ers Unveil Plans for $1.3B Stadium in Center City 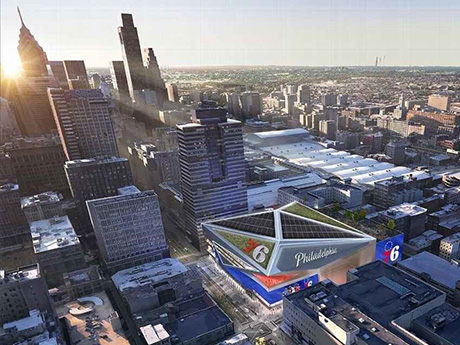 The future home of the NBA’s Philadelphia 76ers, 76 Place, will be located within the Fashion District redevelopment site in Center City Philadelphia.

PHILADELPHIA — Josh Harris and David Blitzer, managing directors of the National Basketball Association’s Philadelphia 76ers, have formed a development corporation for construction of the team’s new arena, known as 76 Place, in Center City Philadelphia. Development costs are estimated at $1.3 billion, with plans to complete construction before the 2031-2032 NBA season.

The property will be part of Fashion District Philadelphia, a 900,000-square-foot mall redevelopment that opened in September 2019. The team will partner closely with Macerich, which owns Fashion District, on the project. The transit-oriented site is located at Market Street and South 11th Street, adjacent to five SEPTA public transit lines and three blocks from city hall.

The Fashion District project was once a highly regarded development with top-tier retailers, but struggled due to the COVID-19 pandemic closing the doors on many retailers just six months after opening.

“The decision to repurpose part of Fashion District Philadelphia to include the new 76ers arena is a natural evolution of the site and a unique and once-in-a-lifetime opportunity for our company,” says Tom O’Hern, CEO of Macerich.

76 Place will be located adjacent to five separate SEPTA public train lines, including the regional rail to many of Philadelphia’s suburbs.

“The Philadelphia 76ers’ extensive evaluation of potential sites for an arena over the past two years culminates today with plans to pursue the Fashion District Philadelphia site as the proposed new home of the team,” says Adelman. “The chosen location is a key step in the process of developing a destination that provides Center City and surrounding communities with an economic engine generating activity through 76ers and youth games, concerts and events.”

The timeline currently calls for entitlements and approvals through 2024, design until 2026, demolition in 2027 and the construction from 2028 to 2031. 76 Devcorp plans to implement a community engagement process and partner with surrounding community groups to achieve neighborhood buy-in for the project.

“Our pledge is to advance equitable, community-driven revitalization through this project and to ensure the arena is a win for fans, Philadelphia and the surrounding communities,” says David Gould, 76ers chief diversity and impact officer. “We look forward to listening to and working with the local community, including local organizations, businesses and residents, especially in Chinatown and Washington Square West, to develop a community benefits agreement that results in long-term positive impact.”

The 76ers currently play in Wells Fargo Center, which was built in 1996 approximately four miles south of the new site. It was not disclosed if the NHL’s Philadelphia Flyers, which currently share the arena with the 76ers, will also move to the new property.