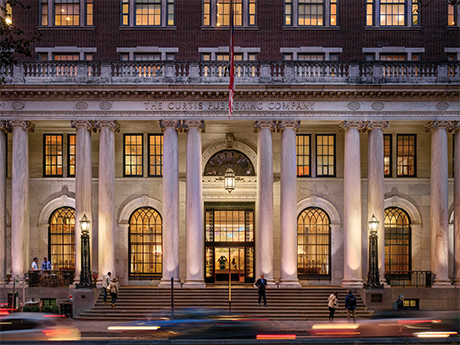 Pictured is The Curtis, Keystone Development + Investment's life sciences facility in Philadelphia that is a redevelopment of a historic publishing house. With demand for life sciences space booming throughout the city and tenants often unable to wait for new construction to be completed, conversion plays like this one are becoming increasingly popular.

Talk about a spark.

When Spark Therapeutics announced plans at the end of last year to develop a $575 million gene therapy manufacturing plant in Philadelphia, it ignited the city’s evolution into a destination for the largest, most innovative life sciences firms in the world.

Over $1 billion in venture capital (VC) investment is pouring into more than 50 Philadelphia life sciences companies that employ some 20,000 people, generating unprecedented demand for lab space. Supply is limited — even with 1 million square feet of lab space in development — and this supply shortage is driving some developers to capitalize on the demand by converting existing building stock.

Philadelphia is a long-reputed “meds and eds” city, meaning it’s home to anchor institutions of higher learning and world-leading medical facilities that are known for innovation and opportunity. These institutions are major drivers of economic growth throughout the city.

Previously, much of the activity in pharmaceuticals and biotechnology occurred in labs in suburban office parks and sprawling corporate campuses. In 2017, the city celebrated two cutting-edge, FDA-approved gene and cell therapies to treat specific types of cancer and blindness. In 2020, six Philadelphia-based life sciences companies rolled out initial public offerings (IPOs).

Where the Action’s At

In Washington Square West near Thomas Jefferson University Hospital, a project has been completed that converted a landmark publishing house into The Curtis, a 100,000-square-foot life sciences facility. Another 350,000 square feet of conversion plays are planned in this submarket over the next few years.

The Curtis epitomizes lab space conversion in the city and is quickly becoming a premier location for life sciences firms to pioneer life-saving therapies and attract world-class talent.

On the north end of Center City, Biomeme moved its corporate headquarters from 10th and Chestnut to 401 N. Broad Street where it will occupy lab, testing, manufacturing and office space. The firm is making this move after quadrupling its workforce over the previous year. Owners of former industrial sites in the Philadelphia Navy Yard and a former refinery in South Philadelphia also plan on contributing to the city’s lab space supply.

The emergence of venture capital’s appetite for life sciences deals and lab demand across the city has been a boon for transaction volume and has prompted rents to skyrocket over the last 12 months. Most of the coming conversions are spoken for and will likely be 100 percent leased upon completion. Thus, supply will continue to be tight, forcing developers to become more strategic and speculative.

Developers in the city with large office vacancies might consider lab space conversions, but high-rise buildings prove difficult for several reasons. Exhaust is a primary concern, with chemical fume hoods required for ventilation capabilities. Running new exhaust systems up 50 stories into the sky comes at a significant cost.

For life sciences firms that are raising money and need space quickly, waiting for ground-up construction is not an option, especially considering how global supply chain woes are impacting development timelines. While this may drive some with short-term requirements to other markets, smart local developers are scouring the city for potential conversion candidates that will house life sciences players looking for prime lab space now.

If the venture capital money continues to flow into the region, there will be no slowing down the march of life sciences firms into Philadelphia. Institutions such as UPenn, the Children’s Hospital of Philadelphia, Jefferson Health and Drexel University continue to fund research and spin out companies, ensuring that Philadelphia will remain a strong innovation hub for life sciences users for years to come

— Keystone Development + Investment is a commercial development and investment firm based in metro Philadelphia.