Public-Private Partnership to Develop $2.8B Mixed-Use Project on Long Island 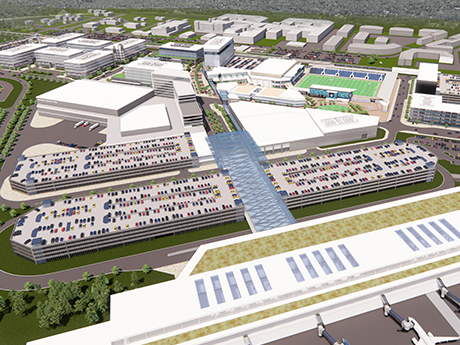 Pictured is an aerial rendering of the transit hubs within Midway Crossing, a $2.8 billion mixed-use development in Islip, New York. A construction timeline for the project has not yet been established.

ISLIP, N.Y. — A public-private partnership between The Town of Islip, Suffolk County and JLL has unveiled plans for Midway Crossing, a $2.8 billion mixed-use project that will be located on Long Island.

The Long Island Regional Planning Council approved the project, which will be the largest commercial or residential development on Long Island in the last 50 years, on the evening of Thursday, May 12. Midway Crossing will span approximately 2.7 million square feet across 179 acres.

Plans currently call for a variety of uses, including life sciences, healthcare and hospitality, as well as a convention center and traditional retail, restaurant and entertainment space. The development team expects these uses to collectively generate more than $4.5 billion in annual economic impact upon completion.

The location is near Long Island MacArthur Airport, as well as the Ronkonkoma Station of the Long Island Rail Road (LIRR), establishing Midway Crossing as a multimodal transit hub. Under the current development plan, the airport and train station would be connected via an 1,800-foot corridor. The development team also plans to make various infrastructural improvements at the airport that could have as much as $1.9 billion in additional economic impact.

Beyond the economic benefits, the partners behind Midway Crossing cited the opportunity to grow the area’s tourism business, as well as to retain younger members of the population, as key driving forces behind the development. Recent research conducted by Suffolk County found that two out of three young residents plan to vacate the area within the next five years due to its high cost of living that can only be sustained by jobs with certain minimum income levels.

To that end, Midway Crossing is expected to directly create more than 9,000 career-oriented positions, including more than 4,000 across STEM (science, technology, engineering and math) and healthcare sectors. Some 14,000 people would be employed throughout all phases of construction, the development team estimates.

Lastly, the movers and shakers behind the project have articulated a commitment to sustainability. Midway Crossing’s technology would time trains, flights and traffic to reduce congestion and feature electric vehicle charging stations and biking networks. A partnership between JLL and Siemens would create a microgrid to generate most of the site and the airport’s electricity from sustainable sources by 2030, and JLL is committed to a net-zero carbon footprint by 2040.

“We need to think big for our future, and Midway Crossing does just that,” says Matt Cohen, president and CEO of the Long Island Association, a nonprofit chamber of commerce serving the region. “It’s a collaborative public-private partnership that maximizes the potential of Long Island MacArthur Airport and the nearby LIRR train station. It creates a true destination that includes new commercial opportunities to replace what is mostly asphalt right now. This is a game-changer that will create new jobs, spur economic growth and attract young professionals and businesses.”

“We build transportation networks to encourage and support developments like Midway Crossing,” says Phil Eng, former president of the Long Island Rail Road. “Midway Crossing is exactly what we want to see — a transformative development that creates opportunities and jobs and makes Long Island a destination to work, live and play. Ronkonkoma, the airport, the train station and now this project make it the gateway to Long Island.”