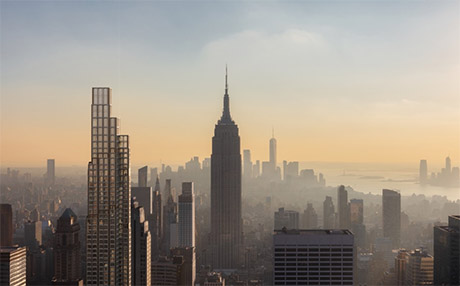 520 Fifth Avenue, the building shown on the left, will be the second tallest building on Fifth Avenue after the Empire State Building.

With site work already underway, the 450,000-square-foot mixed-use tower will be the second tallest building on Fifth Avenue after the Empire State Building. The construction timeline was not disclosed.

The project will include residential components, boutique commercial office space, recreational facilities and ground-floor retail. The first three levels will consist of restaurants and then floors four through 28 will be office space. Floors 31 through 68 will feature residential units, according to New York Yimby. The news outlet also said the residential amenities will include a pool, spa, fitness center and sports court.

Located on Fifth Avenue and 43rd Street in Manhattan’s Midtown neighborhood, the property is situated near notable buildings including the New York Public Library, Grand Central Station, Rockefeller Center and the Chrysler Building.

“We are thrilled to have the support of Bank OZK and Carlyle at this extraordinary time of reinvention in New York City,” says Josh Rabina, president of Rabina. “520 Fifth presented us with an opportunity to mobilize a world-class design team and to start with a clean canvas. We hope to deliver a building worthy of its place in the city’s skyline that will offer New Yorkers a new template for rebalancing work, life and personal fulfillment.”

Architectural firm Kohn Pedersen Fox is designing the tower with Rabina as the lead developer. The project is being built with the principles of sustainability, health, wellness and connectivity in mind, and Rabina will seek LEED, WELL and WIREDSCORE certifications.

Rabina is a New York-based real estate investment and development firm. The company has owned more than 25 million square feet of residential, office, retail, mission critical and industrial properties throughout the United States and abroad.