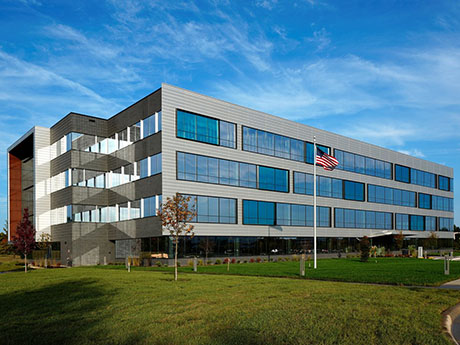 The Louisville office market is taking diverse paths forward following the pandemic. The suburban Class A market is thriving with new construction, rental rate growth and resiliency in the face of downsizing tenants and negative absorption.

A flight to quality among tenants has benefited local developers such as NTS Development, which has been constructing first-class, next-generation buildings at ShelbyHurst Office Campus since 2012. NTS recently completed its fifth speculative office building at the project, 425 North Whittington, a four-story, 130,000-square-foot building that is 60 percent leased with strong leasing activity.

The flight to quality is driving tenants to choose higher-quality buildings with more expensive rental rates to help attract and retain talent and cater to a hybrid workforce. Traditional downtown occupiers are also considering the suburbs for the first time to create a workplace that draws employees back to the office.

Another developer having success in the market is Fenley Real Estate, which built Two Olympia Park Plaza in 2020, leased it to stabilization in 2021 and sold it earlier this year to Atlanta-based KCP Acquisition LLC for $38.7 million, or $285.10 per square foot. In addition, Viking Partners sold two well-located office buildings totaling 339,122 square feet to Albany Road for $42.5 million in July 2022. Viking acquired the mixed-use project in 2016 and redeveloped the under-performing retail center with a new apartment community, hotel and outlots.

Challenges in the CBD
Louisville’s downtown office market is bearing the brunt of remote working. This trend has left the Central Business District (CBD) under-populated to support many of the downtown retailers and service providers. Humana, the largest company headquartered in Louisville and the largest occupier of space in the CBD for several years, reduced its footprint substantially in the past five years.

With the surplus of vacant space downtown, landlords have been offering “eye-popping” concession packages instead of lower rental rates. As a result, average asking rental rates in the CBD have not materially changed since the end of 2019, with the Class A rate at $19.30 per square foot and the Class B rate at $16.23.

Due to the rise in construction costs, landlords are offering unusually high Tenant Improvement (TI) Allowances to build out the space for new tenants. Larger allowances are keeping rental rates higher than they would be otherwise. Landlords with parking, such as Waterfront Plaza on West Main Street, are willing to offer free or reduced-cost parking on a limited basis to attract the right tenants. Parking costs have not historically been up for negotiation in Louisville’s downtown submarket.

SomeraRoad, the newest landlord in the CBD that acquired the 29-story 500 West Jefferson Street building in late 2018, will add first-class amenities and upgrade the early 1970s-era tower to attract the next generation of tenants. Renovations include the building lobby and the addition of a fitness studio, tenant conference center, an outdoor terrace above a three-story annex and a tenant lounge.

One bright spot in the CBD is the strong bourbon tourism trend that has spawned multiple hotels, restaurants and distillery visitor experiences. Another highlight for the CBD is the neighboring NuLu district, which is thriving with its hip restaurant scene, new multifamily under construction, planned hotels and mixed-use developments. These projects should positively impact the downtown submarket as more people live, work and play in the area.

— By David Hardy, Managing Director, and Michael Somervell, Senior Associate of CBRE. This article was originally published in the September 2022 issue of Southeast Real Estate Business.