Posted on September 23, 2022 by Jeff Shaw in Build-to-Rent, Features, Multifamily 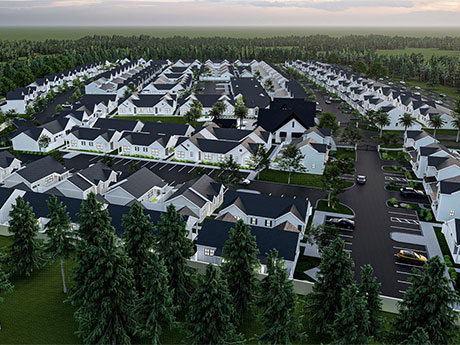 Developers of single-family, build-to-rent homes remain active. Cottage Street at eTown, pictured, is just one of many build-to-rent projects underway in the Sun Belt. This Jacksonville, Fla., project, developed by PARC Group, is slated for completion in 2023. The development will offer a combination of attached and detached townhomes and cottages. (Photo courtesy of CBRE.)

“The economy is starting to feel the effects of higher interest rates, while migration is slowing, and the increasing lack of affordability is affecting high-growth metros,” states the report.

Asking rents increased in only 10 of Yardi Matrix’s top 30 markets in August, with Philadelphia, San Francisco and Nashville all showing a 0.5 percent growth rate. Metros with the largest decreases in asking rents included Raleigh (-1.3 percent), Seattle (-1.1 percent) and the Inland Empire and Las Vegas (both -0.8 percent).

Yardi Matrix attributes this deceleration to multiple factors, including seasonality, cooling in markets that saw rents increase at extraordinarily high rates over the past two years and, most importantly, slowing migration and population figures.

With a decreasing population growth rate and legal immigration dropping to its lowest level in decades, the report emphasizes that rent growth in the future is likely to be increasingly defined by migration trends. During and immediately following the pandemic, many Americans moved in search of cheaper rents or different lifestyles. Workers also took advantage of no longer needing to be physically located close to their places of work. These migration figures — a key reason rents rose significantly in 2021 — are beginning to taper off.

Additionally, according to the report, the single-family build-to-rent (BTR) sector is continuing to mirror the activity in multifamily, with the average single-family asking rent decreasing by $2 in August to $2,090.

Year-over-year growth in the BTR sector also dropped by 170 basis points to 9.5 percent. Of Yardi Matrix’s top 35 metros, 17 showed a year-over-year rent growth of 10 percent as of August, with Washington, D.C., (40.1 percent) and Orlando (39.6 percent) showing the most growth.

Rent growth in the SFR sector appears to be moderating, and higher financing costs and fewer home sales are likely to reduce the acquisition pipeline. Overall, SFR rent levels and occupancy rates remain healthy, though the latter did see a slight national decrease of 1 percent in July.