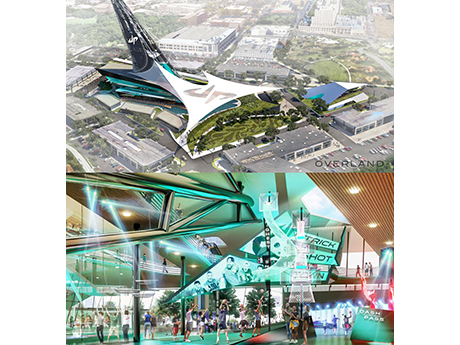 Pictured is a dual rendering of the exterior and interior of Dude Perfect's new headquarters facility, which could land in North Texas, where the sports and comedy entertainment group hails from and is currently based. (Image courtesy of Overland Partners)

FRISCO, TEXAS — Sports and comedy entertainment group Dude Perfect is planning a $100 million headquarters facility and, according to a report from The Dallas Morning News, has placed North Texas at the top of its site selection list. Variety also reports that Dude Perfect has been planning the facility for about a year with San Antonio-based architecture firm Overland Partners, but is also pitching the project to Los Angeles and Atlanta. The facility would include a 330-foot trick shot tower, mini golf course, a museum and merchandise store, restaurants and two acres of outdoor space. Dude Perfect, which has about 58 million YouTube subscribers, is currently based in Frisco. All five members of the group originally hail from North Texas.