Retail Concepts Have to Reinvent Themselves to Stand Out, Say EEE Panelists 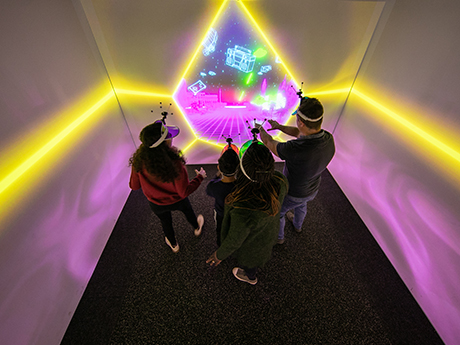 A family engages in one of the interactive games at the Electric Gamebox center at Grandscape in metro Dallas. The British entertainment concept opened this 4,000-square-foot space within a 433-acre mixed-use development earlier this year as its first location in the United States.

LOS ANGELES — After a two-year slog through COVID-19, consumer demand for shopping, dining and entertainment experiences has become a cresting tidal wave ready to descend upon the shore.

The term “pent-up” is frequently used to describe this mentality, but industry professionals know that cliché doesn’t really do justice to the degree of concentrated demand for just about any form of dining out, barhopping, gaming and fraternizing. To this end, the National Retail Federation (NRF) projects that total retail sales across both digital and brick-and-mortar forums will grow between 6 to 8 percent year over year in 2022.

And yet, to invoke another nautical metaphor, this scenario is not necessarily a rising-tide-lifts-all-boats phenomenon — at least not in the long run.

The reality for developers and operators of shopping, dining and entertainment properties is that in order to win customer loyalty in the long haul and infuse a center with true cross-shopping potential and destinational status, they have to create a legitimately unique draw. This notion, while not necessarily revelatory and Earth-shattering in the current brick-and-mortar retail market, has only been more deeply ingrained by the events of the last 24 months.

At the seventh-annual Entertainment Experience Evolution conference that took place in Los Angeles on March 17-18, developers discussed the changing retail environment and how to keep one’s shoppers engaged. In a discussion titled “Recreating The Built Retail Environment,” developers identified effective practices for revamping retail assets that are no longer thriving. Randy Shearin, editor of Shopping Center Business, the flagship publication of Atlanta-based France Media that hosted the event, moderated the panel.

Panelist Whitney Livingston, president and COO of Centennial REC, got the ball rolling with the assertion that developers in today’s market must think more wholistically about what constitutes a retail experience than ever before.

“If we think back 20 years, entertainment was defined as shopping,” Livingston said. “You would go to a mall or a shopping center, not necessarily just to buy a denim jacket, but because it was something to do for hours on end. Now, it’s not just about shopping. It’s about food and beverage, family entertainment concepts, theater, art, gathering spaces and activation.”

Centennial is currently developing is MainPlace Mall, a 1.3 million-square-foot shopping center in Orange County (Calif.) that will offer 1,900 multifamily units, a 400-room hotel, 700,000-square-foot office building and another 100,000 square feet of retail. Construction of the first phase of development, which includes the multifamily portion, is currently underway. The firm is also about to break ground on a 5,000-seat concert venue.

“The most successful centers are going to be the ones that are thinking differently, and those will be the most dominant destinations of the future,” Livingston said.

Retail developers are looking to create properties that are a one-stop destinations for all shopping experiences, meaning there’s something for everyone. An example is Grandscape, a 433-acre mixed-use destination in the northern Dallas suburb of Lewisville. Stellar Development, in partnership with Nebraska Furniture Mart, is developing Grandscape.

The 5 million-square-foot development includes 560,000 square feet of retail, led by anchors Nebraska Furniture Mart and Scheels Sporting Goods, as well as a movie theater. Panelist Steve Graham, principal of Stellar Development, said the development has 900,000 square feet of leasable space, 74 percent of which is geared toward the F&B, leisure and entertainment sectors.

“You hear all the time that shopping centers and malls are dying, and it’s true in some cases for those that don’t reinvent themselves,” she said. “We’ve seen brands that have been around for years just start to fade away. By working with some of our licensees and certain brands, as well as with some of our permanent tenants and trying to help them to reinvent themselves, we’re reinvesting in our tenants and our shopping centers.” At many destinations, the retail use represents just one piece of the puzzle, but it is also the connective thread that brings consumers of all walks — hotel guests, office employees, multifamily residents — together.

Livingston alluded to this notion, stating that her firm tries to look at the retail project as a whole and thinks about the long-term goals of the project in order to ensure the retail aspect is strong moving forward. She said Centennial thinks of creative ways to turn an underperforming retail space into a more effective property by using multifamily and other uses together.

Sherif Masood, national vice president of Retail Asset Management for Oxford Properties Group, added that in the greater Toronto area, his firm is also mixing other uses within traditional retail properties — in this case out of financial necessity.

“We have 6 million feet of retail and today that just so happens to be worth between $5 billion to $6 billion on our books,” he said. “But over the next 10 years, we plan to build 13,000 residential units on those sites, plus 2 million square feet of office space and a hotel. At that point, 50 percent of the assets are going to be retail, and the other 50 percent will be other asset classes.”

Masood also mentioned that investing in a distressed retail asset can end in positive results. He said his company has a shopping center in Quebec City called Les Galeries de la Capitale, which has an indoor theme park called Méga Parc.When Oxford Properties purchased the park, it was about 30 years old and was no longer making money. The firm opted to reinvest about $40 million to rebuild and redesign the attractions. Now, the center makes around $5 million a year in net income and has over a half a million a year in visits.

“It’s really been an incredible story to see how if you spend the time to invest in the right form of entertainment and you can build a little business case around it, it can really elevate the balance of your shopping center,” Masood said.

Livingston later added that going all in by providing the right amount of investment dollars when recreating a retail space is the only way to get desired results. Centennial recently invested $8 million to convert a center court at one of its Chicago-area properties into an immersive park experience. She said the mall is now always busy with people due to how the space was revamped and that spending the full $8 million on the property and was worth every penny.

“If we had spent $6 million on that space, we might as well have spent $0,” she said. “You really have to make sure that your investment is going to deliver the total experience, otherwise it’s not worth it. That’s candidly where some developers miss the mark and what will really separate the winners and the losers going forward.”

In order to improve retail properties, some developers are honing in on which tenants are the best fits, including recruitment of more local concepts.

“As a developer, pre-COVID or even five years ago, we’d often be talking about national tenants, and our centers were 65 to 70 percent full with these users,” Livingston said. “Now we’re really more about finding the most relevant, best merchandisers. These days, that’s often a local or a regional tenant and not a national user.”

When trying to curate the ideal tenant roster, Graham of Stellar Development insisted that it’s vital to visit their businesses in person before signing them to leases. He said he has seen retail tenants online that seemed spectacular based on their website and social media platforms, but in person were less so ­— and vice versa.

Blaise Witnish, chief growth and innovation officer with Fun Lab, an entertainment concept that features bowling, arcade games, laser tag, ropes course and other activities, noted that finding new ways to elevate the guest is always top of mind. It’s not just about heaping in entertainment-focused ideas and attractions. Instead, Witnish said, developers must consider ways to make the experience of traveling to a center memorable.

“Customers are sitting on the couch right now — you have to get them out and into the center, and you’ve got to give them a reason to do that,” said Witnish.

The panelists agreed that in order to create memorable retail experiences, centers should house a wide array of tenant offerings. For example, Taubman’s Great Lakes Crossing Mall in Auburn Hills, Michigan, houses a movie theater, Legoland and an aquarium. McGhee-Curtis said this combination allows for “continuous engagement,” such that customers want to come back frequently and take advantage of whatever they missed on their previous visit.